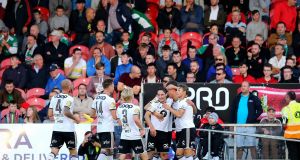 Jonathan Levi of Rosenborg celebrates scoring the second goal of the game with his teammates as they beat Cork City 2-0 in their Europa League qualifier. Photo: Ryan Byrne/Inpho

Cork City’s European campaign is all but over for this year after they couldn’t capitalise on a good start against Rosenborg at Turner’s Cross.

The home side had been lively in the early stages of this Europa League third qualifying round first leg but, as against Legia Warsaw in the Champions League last month, they couldn’t make that count on the scoreboard and were punished by their opponents’ efficiency in front of goal.

With captain Conor McCormack imposing himself strongly in midfield, Garry Buckley and Barry McNamee had gone close for the Rebel Army in the opening 20 minutes without properly testing André Hansen in the Rosenborg goal. In contrast, the visitors took the lead with what was effectively their first chance, as Birger Meling’s cross was headed by City defender Seán McLoughlin as far as Jonathan Levi, who struck a fizzing shot past Mark McNulty from a very tight angle.

The goalscorer went close to another soon after that as City sought to reassert themselves, though they manage to inject new life into their game around the half-hour mark as Buckley drew a save from Hansen from near the endline and Hansen bravely dived on another ball across to stop Graham Cummins from netting a tap-in.

Once again, though, Rosenborg were clinical, doubling their lead just before half-time. Marius Lundemo, composed in midfield throughout, drove forward and found Levi, who quickly exchanged passes with Mike Jensen before rifling an effort in off the post.

Kieran Sadlier was introduced for McNamee at half-time as City manager John Caulfield sought to salvage something from the game. The winger did make his presence felt almost immediately, linking well with Shane Griffin, whose cross Jimmy Keohane was just unable to get under control, and then a shot from the left by Sadlier whistled over.

He also forced a good save from Hansen from a 30-yard free kick at the expense of a corner, though Rosenborg had their chances to get a third goal too - Jensen shot wide from close range after Levi’s knock-down and Nicklas Bendtner was also off-target.

City had gone 4-4-2 with the introduction of Ronan Coughlan while Damien Delaney also sought to join the attack in the dying minutes.

A Sadlier free kick was almost reached by Buckley, but once again they drew a European blank, leaving them needing a heroic turnaround in Trondheim next week.