Spurs inch their way to opening day win over Newcastle 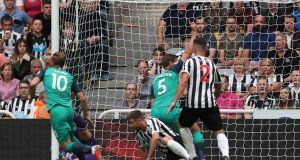 The England international’s contribution sealed a 2-1 win at St James’ Park, with all the goals coming inside the opening 18 minutes as Joselu cancelled out Jan Vertonghen’s opener before Alli struck.

Spurs dominated the first half with Christian Eriksen prominent, but found themselves in a battle after the break during which Mohamed Diame and Salomon Rondon both hit the woodwork as the Magpies fought for some reward in front of a crowd of 51,749.

But it proved another frustrating afternoon for England skipper Harry Kane, who left Tyneside still awaiting his first ever Premier League goal in August after 14 games.

The visitors needed just eight minutes to get their noses in front when, after Magpies goalkeeper Martin Dubravka had turned away an Eriksen shot, the Denmark international delivered the resulting corner for defender Davinson Sanchez to attack.

The Colombian’s header down was met at the far post by Vertonghen under pressure from Paul Dummett and the ball ricocheted down from the crossbar, with referee Martin Atkinson awarding the goal after being alerted that the ball had crossed the line.

However, the lead lasted just three minutes as Joselu rewarded manager Rafael Benitez for his faith in picking him ahead of summer signings Rondon and Yoshinori Muto.

Matt Ritchie cut back on to his left foot and curled in a cross which the striker met unopposed to glance a header past Hugo Lloris.

Spurs continued to dominate possession and regained their lead with just 18 minutes played when full-back Serge Aurier drove a cross to the far post for the unmarked Alli to power a header past Dubravka.

The home side gradually settled into the game after a whirlwind opening half-hour, but with Diame in particular guilty of repeatedly squandering the ball, they struggled to build momentum and Sanchez might have deepened their woes with a glancing 38th-minute header which flew across the face of goal.

Ayoze Perez only just failed to reach Ciaran Clark’s scuffed shot as it trickled past the far post seconds later, but the visitors went in at the break with their advantage intact.

Diame was unfortunate not to level within two minutes of the restart when his stinging left-foot shot came back off the post, although Alli passed up a chance to extend his side’s lead when he bundled Kane’s mishit shot straight to Dubravka.

The Magpies should have been level six minutes into the half when Joselu picked out Kenedy in acres of space, but the Brazilian’s first touch let him down horribly.

Only Dubravka’s heroics prevented Newcastle old boy Moussa Sissoko from adding to Tottenham’s tally when he produced a fine save to keep out the Frenchman’s close-range 56th-minute effort, but Lloris had to match him to repel Perez’s shot on the turn on the hour.

Substitute Rondon almost snatched a point five minutes from time when his shot hit Vertonghen and looped over Lloris, only for the ball to come back off the crossbar.

3 Ringrose and Lowe return to Leinster fray after injuries