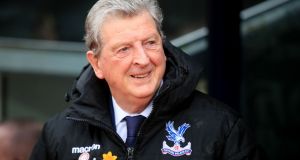 Crystal Palace manager Roy Hodgson has signed a contract extension with Crystal Palace until 2020, the club have announced. Photograph: PA

Roy Hodgson has been rewarded for a hugely encouraging first season at Crystal Palace with a contract extension to 2020.

The former England boss took over at Selhurst Park in September last year, after Frank de Boer had suffered five defeats in five Premier League games to leave the Eagles rooted to the bottom of the early standings.

It was a fantastic achievement from Hodgson, who had quit as England manager after England’s Euro 2016 exit to Iceland.

Hodgson said: “I am delighted to have extended my contract with Crystal Palace. It is a club that has been close to my heart since I was a youngster growing up in the borough of Croydon, and having stood on the terraces in the 1950s, it is a wonderful thing to be managing my boyhood club all these years later.

“We can be proud of our achievements last season in turning things around despite a poor start, but this year we want to ensure we don’t endure the same struggles.

“I am thrilled that I have the support of the owners, who believe that I am the right man to help this club move forward and I will do everything I can to make that happen.”

The season ahead will be Hodgson’s 43rd in management, after taking charge at Swedish side Halmstad in 1976.

Palace chairman Steve Parish said: “I’m thrilled that Roy has agreed to extend his contract and I know the news will be a big lift to everyone connected with the club.

“We are looking to build on the hard work and results achieved last season and I believe this is the most important part of making that happen. It’s of course fantastic that Roy has a long connection with the club and I think that understanding the south London mentality is a benefit, but make no mistake he’s here because he’s the very best man for the job as we look to take this club forward on and off the pitch.

“I am equally pleased that (assistant manager) Ray Lewington has also extended for the same period, putting us in great shape for this season and beyond.”