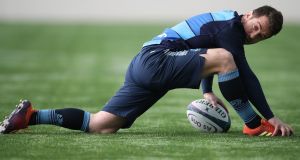 Scotland coach Gregor Townsend has dropped captain Greig Laidlaw to the bench for Saturday’s Six Nations clash with Wales at Murrayfield, but restored Finn Russell in the outhalf position after he recovered from a head injury.

Scrumhalf Laidlaw will be replaced by Ali Price, with Townsend picking a side he says has “the best chance of winning at the weekend” and making four changes in all.

“Greig, having started in our last six games is a key member of our squad, although this week we have decided to utilise his leadership and experience off the bench,” Townsend said.

“He is driven by a desire to win for his country and he should have an important role to play in the latter stages of the match.”

Russell’s return at outhalf is a boost for the side and sees Pete Horne move to inside centre ahead of Sam Johnson. Darcy Graham will earn a first start on the wing in the place of the injured Sean Maitland and Willem Nel takes over at tighthead prop from Simon Berghan, who drops to the bench.

Hooker Stuart McInally takes over the captaincy from Laidlaw.

“We have had a couple of weeks since our defeat in Paris to look at ways we can improve our performances, through what we do in training, our tactical approach and through selection,” Townsend said.

“First and foremost, we select a team we believe gives us the best chance of winning at the weekend, while we also have an opportunity to reward players who have been in very good form and have been knocking at the door of the team in recent weeks – Darcy Graham and Ali Price especially.”

Lock Jonny Gray and wing Tommy Seymour will both earn their 50th caps.

“Tommy has started all his games and has an impressive try-scoring record, which is a fundamental element of the game for a winger,” Townsend added.

“Jonny is an exceptional player who came through as a young man and, by becoming the second-youngest player to win 50 caps, shows just how well he’s played in that relatively short time.”

Scotland beat Italy in their Six Nations opener, but have since suffered a home defeat to Ireland and an away loss to France.

They host a Wales side that are unbeaten in their previous 12 Tests.