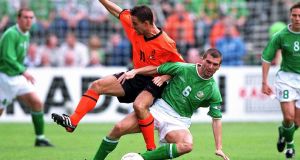 For anyone grumbling, Irish football pre-dates the border by 40 years. It is not easy and 140 years leaves room for many omissions, so, apologies.

But here’s an all-time all-Ireland XI. Most are chosen on sheer ability but the goalkeeper in particular is selected on his significance. Elisha Scott, Harry Gregg, Pat Jennings and Shay Given can consider themselves unfortunate.

The team comes in a 3-4-3 formation. It would play in Belfast, of course, the capital of Irish football.

Ireland has produced many fine goalkeepers but none of them shaped football as McCrum did. McCrum invented the penalty kick. Regardless of talent, that creativity makes him indispensable.

Born in 1865, McCrum played at the beginnings of the organised sport, as it passed from amateurism into professionalism. At his local club, Milford, he viewed the lingering element of rugby – handling, barging – as a blight and came up with a ‘penalty’ for infringements. It was a free shot at goal.

The game’s governors initially rejected McCrum’s proposal as ‘the Irishman’s motion’, but in 1891 accepted it. Eleven years later came the penalty spot on every pitch that ever was. Without McCrum, there are no Bonner or O’Leary moments nearly a century later.

Irwin won his first Ireland cap in 1990 and his last in 1999. It was his decade. As an always-composed, nippy, skilful full back, Irwin was a cornerstone of Alex Ferguson’s dominant Manchester United and a consistently re-assuring presence in a green jersey.

Irwin won seven Premier League titles, three FA Cups and the Champions League in 1999, among other things. He was right-footed but played left back when asked, which he was frequently because he was so good. Played in the first two games of USA ’94.

The most important Irish footballer of all time? Quite possibly. Like William McCrum, McCracken did not just play football, he changed it.

Born in 1893 off the Falls Road, McCracken played for Distillery before being transferred at 21 to Newcastle United, then about to win the league three times in five seasons and reach five FA Cup finals.

McCracken made his Ireland debut in 1902. (There was one team then, Roscommon’s Andy Gara scoring a hat-trick.) McCracken should have been the centre-piece of the side for years but was banned by the IFA for asking for the same money his colleagues at Newcastle were paid when representing England. So McCracken was omitted from 1907 until 1919.

He was a legend in England by then, his offside tactic bringing him notoriety. Gradually others copied, to the extent that in 1925 the offside rule was changed from three men behind the ball to two, as it remains. Described as the “Irish Mephistopheles” in a Guardian appreciation, McCracken lived to 95.

Some player. That’s a starting point and although it can be said about Johnny Carey or Paul McGrath and others left out, Lawrenson was as elegant and effective as any.

A fixture in a brilliant Liverpool team, Lawrenson won five titles with Liverpool and the European Cup.

He brought a diaspora dimension to the Irish team from 1977 to 1987. As with others, his accent was no hindrance to his commitment or skill and he would have won more than 39 caps but for injury. He missed Euro 88 because of one, having scored the goal at Hampden Park in 1987 to help Ireland get there.

The greatest Irish player of the last 30 years, Keane was a serial winner with Manchester United and a driving force of nature with his country.

Sometimes his off-pitch personality – volatile, charismatic – obscured appreciation of the intelligence Keane displayed on it. A pure passer of the ball, with intuitive positional awareness, Keane was a rhythmic presence when in possession. When out of it, he could still dominate opposition players, and sometimes team-mates, with his aura and energy.

The World Cup of 2002 will be a regret forever, because it deprived the Irish squad of its most influential player.

The only Irishman to have been voted England’s Footballer of the Year twice, Blanchflower was a born leader. He was captain of Tottenham when they became the first club in the 20th century to win the double – in 1961; he had already been captain of Northern Ireland at the 1958 World Cup in Sweden, when the 17-man squad stunned all by reaching the last eight. He was named alongside Harry Gregg and Pele in the team of the tournament.

Footage of Blanchflower reveals Keane-esque prompting. Off the pitch Blanchflower was rather different, though hardly predictable. He was a storyteller, a poet, whose distaste for the concept of ‘winning ugly’ was palpable and voiced often.

Another challenging Irish midfielder of infinite gifts, a combination of velvet and steel, a worthy contender in a best-of-them-all conversation.

Giles won his first cap as an 18 year-old in 1959 – he scored against Sweden at Dalymount Park – and his last in 1979 against West Germany at Lansdowne Road.

He was a precise creator, first from the wing with Manchester United, then from central midfield with Leeds United, for whom he is a legendary figure. His colleagues always commented on the space Giles engineered for himself, even in a crowd. The citation for Giles’s inclusion in English football’s Hall of Fame includes a quotation from Alf Ramsey: “As I look at all the talent and character at my disposal today, my one regret is that John Giles wasn’t born an Englishman.”

The left side of a superb midfield, Brady’s left foot would bring balance as well as everything else the great Dubliner added to a football pitch – vision, passing, tempo, goals. He also had attitude and would fit in with this awkward squad of a midfield.

As with too many other Irish players, Brady’s greatness was not maximised at international level, though he had some magical moments in green – not least on his debut in 1974 in Dublin against the Soviet Union.

But at club level Brady was glorious, first for Arsenal for nearly a decade. He was voted Players’ Player of the Year in England in 1979 and then moved to Juventus where he won Serie A twice.

What is there to say? The only Irishman to win European Footballer of the Year – in 1968, aged 21 – he was third behind Johan Cruyff in 1971. Yet by 1974, his 11th season at Manchester United, Best was finished, or finishing.

First capped in 1964, his last appearance was in 1977, but there were only 37 Irish caps and nine goals. Unfulfilled; unforgettable.

He would be centre forward in this team and not just because he was one at Sheffield United and Arsenal, but because he represented both Irelands in an era when you could.

In 1931 Dunne scored against Wales, Scotland and England in consecutive games for ‘Ireland’, the northern IFA team, having in 1930 scored for the ‘Free State’, the FAI team, in Belgium. In all he would play 22 Irish internationals and score 17 times.

Goals were Dunne’s currency. At Sheffield United he scored in 12 successive games in 1931-32, the record Jamie Vardy could not quite equal. It was the third season in a row Dunne scored more than 30 league goals, a record that stood until Alan Shearer turned up 60 years later. When Dunne left the Blades for Arsenal, the Gunners won the league and Sheffield United were relegated. He bears comparison with any Irish striker.

Like Blanchflower later, Doherty moved to England from Glentoran. In early 1936 he moved from Blackpool to Manchester City for a club record fee. He was 22, an inside forward of exceptional skill and energy. City had never won the league and were about to finish ninth. The next season, with Doherty outstanding, City were champions of England.

Alas, Doherty’s career was interrupted by WWII. He played for Ireland (IFA) before and after the war and then managed the team with typical brilliance in 1958 in Sweden. He was opinionated and his opinion of the IFA was not flattering.

This would be quite a vocal dressing room.

Aston Villa pile more misery on Steve Bruce and Newcastle 22:22
Leinster and Larmour leave it late to break Munster hearts 22:04
Cheltenham run out of legs up the hill as Man City escape shock for the ages 20:08
RTÉ reveal Young Sportsperson and Manager of the Year nominees 18:22
West Ham rout Doncaster Rovers to set up tie with Man United or Liverpool 17:24