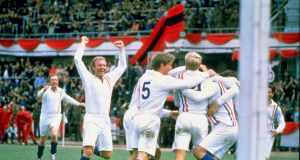 Actor Michael Caine and England player Bobby Moore of the POW XI celebrate during a match against Germany for the film Escape to Victory. Photograph: Allsport UK /Allsport

With four minutes remaining and the Allied prisoners trailing the Germans 4-3, Luis Fernandez (Pele) rises from the bench, shrugs off the pain of broken ribs and announces, “I must play!” Moments later, he nutmegs a defender and knocks the ball out wide where Terry Brady (Bobby Moore) collects it before unfurling a delightful cross.

Left arm pinned to his chest, Fernandez dashes forward, flings himself into the air and executes the perfect overhead kick to make it 4-4. The camera cuts to the stands of the Stade de Colombes in Paris where, much to the consternation of the distraught Nazi officer alongside him, Major Karl Von Steiner breaks into spontaneous, gleeful applause. A former international footballer, he can’t help admiring the greatness involved.

Since Max Von Sydow’s death last week at the age of 90, too many worthy retrospectives of an all-time great acting career neglected to mention his wonderful turn as Von Steiner, the “good German” in Escape to Victory.

Cineastes have apparently been too busy lauding his portrayal of Antonius Block, the Crusader knight playing chess against death in Ingmar Bergman’s The Seventh Seal or his Jesus in The Greatest Story Ever Told.

Not to mention Father Lankester Merrin, the Jesuit facing down the devil in The Exorcist where the Swede’s lanky silhouette featured on one of the truly memorable movie posters.

All fine films in their own right but none can compare to the 1981 prisoner of war soccer epic where Von Sydow got to showcase his acting chops alongside such thespian talents as John Wark, Kevin O’Callaghan, and various other members of an ill-starred Ipswich Town team that really should have won a league title.

The man whom Bergman once described as “the best Stradivarus I ever had in my hands” spent one summer on a set outside Budapest sharing the stage with such dramatic luminaries as Ossie Ardiles and the late Kazimierz Deyna.

The formula for the film seemed simple enough. Take a plot line from The Great Escape, mix in the sport behind barbed wire vibe of The Longest Yard and get the crowd singing a lusty rendition of La Marseillaise a la Casablanca.

Throw in a jaunty soundtrack by Bill Conti of Rocky fame, add a sprinkling of acting heavyweights like Von Sydow and Michael Caine, and capitalise on Sylvester Stallone being near the peak of his box office powers.

And, no small detail, put John Huston, whose resume included The Maltese Falcon and Treasure of the Sierra Madre, in the director’s chair with a tasty budget of $14 million.

“If nations could settle their differences on a football pitch, wouldn’t that be a challenge?” says Von Steiner to John Colby (Michael Caine), a former West Ham United player, as he hatches the plan to have a polyglot prisoners of war XI take on a German national side in a friendly for propaganda purposes.

Much to Von Steiner’s dismay, the Nazis try to fix the outcome with a bent referee and by stocking the opposing squad with skeletal prisoners from Eastern Europe.

“One might have expected this statuesque Scandi blond to have been a rather grave man, but, in addition to being a stunning actor, the endearing surprise about Max Von Sydow was that he had a delicious sense of humour,” wrote Tim Pigott-Smith who played one of the English officers in the camp.

“We spent many hours compiling limericks about the cast and crew, and he bought me a book of dirty limericks, inscribed, ‘In all decency, Max’. He was a gentleman.”

Imagine Von Sydow passing his down time on set making up off-colour rhymes about the likes of Bobby Moore and Mike Summerbee. Rowing in with his co-workers was in stark contrast to Stallone who went all Hollywood big shot the moment he arrived.

The Italian stallion insisted on his own chair that nobody else was allowed to sit on, and, rather than hanging with the rest of the cast at weekends, he usually flew to Paris to party. All forgivable enough except he also argued with Huston that the final scene should be rewritten so his character, Hatch, the goalkeeper, could score the winner.

So ill-equipped to play in goal that he kept injuring himself with each routine dive, Stallone told reporters, “I’m a walking blood clot”.

At one point, Huston spent thousands having a mask of his face made and considered having Ipswich custodian Paul Cooper do his on-field scenes wearing it. Things never came to that but it was all a long way from wringing genius out of Humphrey Bogart on The African Queen.

Waning though his own powers were at that point in his life, the director earned his corn in the denouement of the film when Baumann, the German captain (Werner Roth of the New York Cosmos) prepared to take a last-minute penalty.

As he did repeatedly throughout, Huston shows the action unfolding through the eyes of Von Steiner. In the space of a few frames, he cuts from Sid Armor (Mike Summerbee) earnestly shouting, “Come on ‘Atch! Come on!” to one of the finest actors of the 20th century betraying every emotion in his extensive repertoire without speaking a single word.

A financial flop, the film was mostly panned although one critic lauded Von Sydow for his performance of “weary dignity”, and, to some of us, it remains, of course, the greatest story ever told.

1 Ken Early: Despite coronavirus, Premier League season must be finished if at all possible
2 My favourite sporting moment: When Zidane glided through Brazil in 2006
3 Favourite sporting moment? It’s a bit like choosing your favourite child . . .
4 Summer tours next in line for postponement as rugby assesses options
5 Police investigating after Jack Grealish is pictured at a road incident
Real news has value SUBSCRIBE
Crossword Get access to over 6,000 interactive crosswords