Governing bodies had originally agreed a suspension until early April 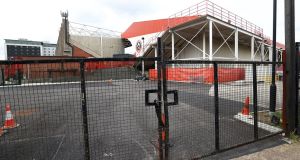 The provisional date of the first weekend in April for the resumption of professional football has been pushed almost a month further on until “no earlier than 30 April”, the Premier League, Football Association, EFL and women’s professional game have said in a joint statement.

The announcement, which emphasises that public health is the overriding priority in the coronavirus crisis, was issued after an emergency conference call with the 20 Premier League clubs. The FA said that it had “extended indefinitely” the date for the season to conclude, after its board sanctioned a relaxation of the standard June 1st finish date given the unprecedented circumstances caused by the pandemic.

No date, even provisional, was given by the leagues for the season to be concluded, as there is a recognition that the whole of society is in terribly uncertain times and any resumption, most probably behind closed doors, is dependent on government health advice and policies.

Uefa this week did state a hoped-for finish date of June 30th for the conclusion of European club football seasons when it postponed this summer’s European Championship, due to be held from June 11th to July 11th, to allow more time. Fifa, though, said on Wednesday that it had set up a working group with Uefa and the other continental federations to examine how to relax normal player registration rules if the season, and players’ contracts, need to be extended beyond June 30th.

“The FA, Premier League, EFL and women’s professional game, together with the Professional Footballers’ Association and League Managers Association, understand we are in unprecedented times and our thoughts are with everyone affected by Covid-19,” the statement said

“We are united in our commitment to finding ways of resuming the 2019-20 football season and ensuring all domestic and European club league and cup matches are played as soon as it is safe and possible to do so.

“We have collectively supported Uefa in postponing Euro 2020 to create space in the calendar to ensure domestic and European club league and cup matches have an increased opportunity to be played and, in doing so, maintain the integrity of each competition.

“The FA’s rules and regulations state that ‘the season shall terminate not later than the 1 June’ and ‘each competition shall, within the limit laid down by the FA, determine the length of its own playing season’. However, the FA’s board has agreed for this limit to be extended indefinitely for the 2019-20 season in relation to professional Football. Additionally, we have collectively agreed that the professional game in England will be further postponed until no earlier than 30 April.

“The progress of Covid-19 remains unclear and we can reassure everyone the health and welfare of players, staff and supporters are our priority. We will continue to follow government advice and work collaboratively to keep the situation under review and explore all options available to find ways of resuming the season when the conditions allow. We would all like to re-emphasise that our thoughts are with everyone affected by Covid-19.”

Having set the space of six weeks before even considering playing again, football’s authorities are holding urgent talks with Sky, other broadcasters and sponsors about maintaining the game’s financial stability. On Wednesday the EFL announced a £50 million ((€53.7 million) package, in effect bringing forward the distribution of TV money, to help clubs with immediate cash flow crises. – Guardian