Gary Owens confirms he is to leave FAI 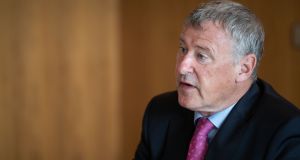 Gary Owens: “I’ve had fun with the role here, it’s been an interesting journey.”

Interim FAI CEO Gary Owens has said he will leave the association over the coming months with the 61-year-old suggesting that he has achieved what he had hoped to during his time at the organisation.

With the process of selecting a longer term appointment in full swing this week, Owens, who was seen as a strong contender if not the frontrunner, seems to have timed his announcement so as to avoid the impression that he had in the end entered the race but been overlooked.

In a statement, the association said that he had written to staff on Friday to notify them of his intention to move on having informed Roy Barrett of his decision earlier in the week.

“I came in to do a job and I feel that I have done it,” he told The Irish Times. “There are a few things to look after before I go in terms of getting the new committee structure right and the new electoral code but I think those can be completed.

“I have said that I will stay however long is required for the new person to take over and that will depend on their notice period but I am under no real pressure between now and the end of the year.

“After that I have other business interests to get back to but I’ve had fun with the role here, it’s been an interesting journey. I feel the new structures have helped the association get to a better place and,” he added, perhaps a little mischievously, “I’ve learned a little bit how the media works.”

Owens acknowledges that he and his fellow former members of the “Visionary Group” did not win everyone over or convince them that they did not some greater agenda. But he likes to think that “if you try to do the right thing then people judge you on your behaviour and my challenge to people was just to come and talk to us.”

Getting the motions required to approve the Memorandum of Understanding with the Government passed last Monday was a significant milestone in the association’s ongoing recovery from the brink of financial collapse but Owens still describes the situation on that front as “fragile” and says that the among the scenarios being assessed by the organisation at present is one in which there might be no crowds at games before the end of next year.

“Things may get back to something approaching normal before that but the restrictions may remain in place for some time and from a financial point of view, you have to plan.”

He also oversaw a significant restructuring of senior management in Abbotstown and intends to complete a further element of the reorganisation which is currently under way over the coming weeks.

FAI President Gerry McAnaney said he would be sorry to see Owens go. “I’ve enjoyed working with him,” he said. “He reached out to a lot of sections of the game that wouldn’t have been used to being reached out to.”