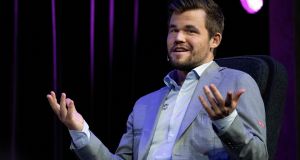 The grandmaster is enjoying his best season ever in the Fantasy Premier League (FPL) game and held on to top spot on Sunday after moving to the summit thanks to a fine Saturday in which his captain, Mohamed Salah of Liverpool, scored twice to earn 32 points.

Upon reaching the top of the standings he changed his Twitter profile to reflect his lofty position, it now reads: “World Chess Champion. The highest ranked chess player in the world. Current (live) #1 Fantasy Premier League player.”

Carlsen led the standings by one point as of Monday, but second-placed Nick Tanner, the former Liverpool and Bristol Rovers defender, had three players in last night’s Crystal Palace v Brighton match while Carlsen had none.

Carlsen claims his success in fantasy football is down to luck. The chess champion’s team, Kjell Ankedal, finished among the top 3,000 players in the 2017–2018 league, following three other impressive seasons.

It took Carlsen just six weeks to make it into the top 1,000 this season and he has been mounting a charge for the top ever since.

Asked to comment on his success this season, Carlsen cited the Opta data used by FPL players to track footballing form. “In fantasy football I’m both an optimist and an Optamist,” he told the Guardian in a one-line email.

Carlsen, like many Norwegians, is obsessed with both the Premier League and its fantasy league spin-off. In 2017, eight players from Norway were in the top 50 FPL players in the world.

According to chess journalist Tarjei Svensen, who has known Carlsen since he was eight and follows all of his games, “His ability at fantasy league has been known for a couple of seasons now, but this season has been exceptional and he’s had another good week.”

He added: “His rise up the charts is incredible. He had a really good year for a while last season and then he dropped a couple of hundred places at the end of the season, but he was still in the top 1,000.”

Svensen reckons Carlsen excels at FPL because of a phenomenal memory for Premier League details. His level of knowledge about English football is amazing, which must help him a lot,” he says.

When he was asked about the success of his FPL team on Norwegian TV in October, Carlsen was worried such questions would jinx his performance. Still, he climbed from 162 in the table to the top three.