Wilfried Zaha strikes to save Palace a point against Brighton 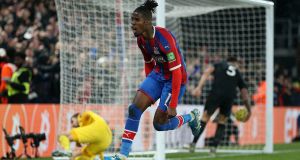 In many ways this result was a microcosm of Roy Hodgson’s career. In his 100th match as the Crystal Palace manager, the 72-year-old had seen his side run ragged by Graham Potter’s impressive team and was staring down the barrel of a third successive defeat to their bitter rivals after Neal Maupay’s seventh Premier League goal of the season.

Yet Hodgson has not been in this game for more than 40 years without learning a thing or two and it was the visitors who were left hanging on for the draw after Wilfried Zaha’s brilliant equaliser – his sixth goal in 11 matches against Brighton – ensured Palace remain three points clear of their not-so-near neighbours in mid-table. “It was a wonderful gutsy, resilient, determined performance full of absolute character,” the Palace manager said. “The way the game panned out, I think I’ve got to be very satisfied – to be honest it feels even like half a victory.”

In the buildup Potter had described Hodgson as a “legend” in Sweden after cutting his managerial teeth in Scandinavia in the late 1970s and the similarities between the two men in the dugout provided a fascinating subplot to this always spicy encounter.

The managers had shared a handshake and a joke as they emerged from the tunnel, with Potter, who spent eight years in charge of Östersund before returning home last year with Swansea, experiencing his first taste of an unusual enmity that dates back to the personal rivalry between former Tottenham teammates Alan Mullery and Terry Venables in the late 1970s.

Hodgson handed a first league start since August to Christian Benteke, while Jaïro Riedewald was recalled to play at left-back in the absence of both Patrick van Aanholt and Jeffrey Schlupp – the first time the Dutchman has started a league match since February 2018. Brighton took the spoils in this fixture last season thanks to Anthony Knockaert’s late goal but with him and the former manager Chris Hughton now a distant memory on the south coast, this is a different side under Potter.

The visitors dominated possession from kick-off, with Palace content to sit back and attempt to hit them on the break. Aaron Mooy was the closest to breaking the deadlock when his shot went just wide, before Riedewald was lucky to escape when he appeared to bring down Martín Montoya inside the area.

Somewhat mysteriously, the VAR official, Martin Atkinson, decided the Palace defender had not made contact. Guaita did well to stop Lewis Dunk’s header from the resulting corner. “It looked like there was something there – sometimes you get them but sometimes you don’t,” Potter said, philosophically.

Benteke’s only real contribution of the half was to pick up a booking after catching Dunk with his arm as they went up for a header. Riedewald, who Hodgson revealed had picked up an injury in training before the match, was put out of his misery at the break and James McArthur shifted to a makeshift left-back.

Out of nowhere, Benteke almost shocked Mat Ryan into conceding when his cross sailed over the head of the Brighton goalkeeper and cannoned back off the woodwork.

That would have been cruel on Potter’s side but his decision to swap Leandro Trossard to the right flank so he was up against McArthur paid dividends shortly afterwards. The Belgian’s cross picked out Maupay on the penalty spot and he made no mistake via a deflection to give Brighton a deserved lead.

It could have been even worse for Palace had Guaita not recovered after fumbling the ball at Maupay’s feet following a deep cross but the Spaniard somehow scrambled to deny him a second.

Palace finally registered an effort on target in the 70th minute via a Benteke header easily gathered by Ryan, before the goalkeeper had to keep out the same player’s powerful effort at the near post.

Suddenly the home supporters had something to shout about and soon Zaha bamboozled Montoya before firing the ball into the top corner with his left foot. The goal almost lifted the roof off this old stadium as Hodgson punched the air in delight.