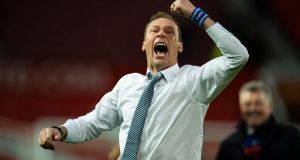 “Och, not Duncan Ferguson again,” Alex Ferguson used to complain whenever his Manchester United side came up against Everton. Not without reason, either.

More than once, Ferguson would find his plans laid to waste by his younger namesake: seven goals in all, including headed winners in 1995 and 2005. For the older Ferguson, “Big Dunc” represented the dangerous unknown: an inimitable cocktail of salt and chaos that a generation later, in his newest guise as a manager, seemed to be undoing United all over again.

As Everton’s interim manager completed his television interview at the end of this 1-1 draw, he turned towards the knot of travelling fans in the corner. Arms pumping, jacket off, shirt sodden, he demanded and received their acclaim.

A short distance away in the directors’ box, the power trio of Bill Kenwright, Farhad Moshiri and Marcel Brands gazed inscrutably on. Ten days in and their hasty stop-gap appointment was already giving them plenty to think about.

For Ferguson, it had been an impressively on-brand afternoon. Lots of TV-friendly harrumphing on the touchline. A blindingly impudent power-substitution, hooking Moise Kean after less than 20 minutes on the field and after Mason Greenwood’s late equaliser for United, a grit-flecked backs-to-the-wall rearguard.

All culminating in – as Ferguson was at pains to point out – Everton’s sixth draw at Old Trafford in almost 30 years, one apparently secured by appealing to their own basic essence: hunger, aggression, commitment, a sort of all-round Big Dunc-ness.

These are, after all, the qualities we most closely associate with Ferguson, based largely on a playing career that ended 13 years ago. We remember Ferguson for the headbutts and the headers, for the balls and the belligerence. We forget the journey of maturity and erudition that has come since, the coaching badges earned and the tutelage served under five different Everton managers.

We see the fist-pumping on the touchline and the appeal to tradition and mutter reassuring phrases like “Everton DNA” and “he just gets the club”. Meanwhile, we overlook the fact that he sneakily asked Mason Holgate to slot into defence at kick-off to fool everyone into thinking they were playing a 5-3-2.

We overlook, too, the more prosaic factors behind Everton’s minor resurgence: a clear tactical plan based on tight defensive organisation, judicious rather than mindless pressing, funnelling the ball out wide in order to create overlaps and overloads on the flanks. It may not be the most sophisticated strategy, but given Everton’s current plight, there’s certainly a discernible logic to it. As this game demonstrated, nine times out of 10 you’re better off with a limited plan than no plan at all.

Do United have the faintest clue how to play these sorts of games? Certainly these 90 minutes offered scant evidence, as the Tottenham and Manchester City wins evaporated in a fog of midfield indecision, squandered possession and interminable dead ends. The lack of creativity from Fred and Scott McTominay was painfully predictable, not that Juan Mata did much better when he came on later.

Indeed, United often look at their best when they forgo midfield altogether, when Harry Maguire forays from deep or when they punt quick long balls into the channels for their elastic front three to chase.

The problem with a counterattacking game comes when you have nothing to counter and it was instructive that United’s best period came when Ole Gunnar Solskjær eventually tired of what he was seeing and decided to stretch the game himself.

Off came the meek Jesse Lingard; on came the springy Mason Greenwood in a 4-2-4: not so much a return to the Ferguson era as a throwback to the Busby Babes.

As Everton tired, United feasted on the space created by their retreating defence, as well as their new greasy sense of adventure. Their goal came from Daniel James leaving his right-wing station and cutting in from the left, feeding Greenwood in the position that James had vacated.

It was telling, in a way, that United discovered a route back into the game only through essentially abandoning all semblance of structure altogether. The risk is that this handbrake-off, anti-tactics becomes a sort of default tactic in its own right, one in which their chronic lack of craft in the middle third goes unaddressed.

You’re reminded of Matt Busby’s famous reply to a United player who once enquired about his tactics – “we play football,” he responded, which looks nice on a mug, but might require a touch of elaboration for the current era.

Similarly, for all Ferguson’s stirring triumphalism, Everton must work out if his vision has a viable future. What happens when their narrow 4-4-2 comes up against a team sufficiently disciplined to nullify it? How do they intend to build play against weaker, more reactive sides? And when the appeals to pride in the shirt begin to run dry, does Ferguson have anything else to offer?

There were plenty of lessons on offer here for both teams. The crux, as ever, is whether they will learn the right ones.

1 Owen Doyle: Creeping professionalism of schools rugby a threat to the game
2 GAA officials and referees brace themselves as new rules kick in, and this time it's for real
3 Caroline Wozniacki’s career ends with defeat to Ons Jabeur
4 Cox calls for a more relaxed transfer regime in the GAA
5 Scotland’s Finn Russell missed training after Sunday drinking session
Real news has value SUBSCRIBE