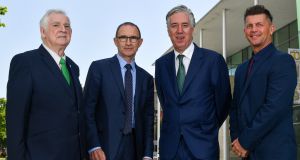 The Government’s new €50 million fund for major sports infrastructure projects is set to provide the money required to proceed with the redevelopment of Dalymount Park and the establishment of the association’s Centre of Excellence at Glanmire in Cork according to FAI chief executive John Delaney.

Speaking at the launch of the FAI’s annual “Festival of Football” in Cork, Delaney suggested that the Government is likely to start accepting applications for funding from the scheme over the summer and that the association’s priorities are the two developments in Dublin and Cork.

The scheme, though, will be open to all of the country’s sports organisations and among the projects expected to receive substantial backing are the expansions of the RDS and Páirc Tailteann in Navan, both of which are to be upgraded to capacities of over 20,000 seats.

The FAI will look for €6 million towards the development of their centre at Glanmire which was officially announced in 2016. The development, which will also serve as a training facility for Cork City, will cost almost twice that amount at €11 million in total but Delaney says that the rest of the funding is already in place.

The exact scale of the Dalymount redevelopment remains uncertain, meanwhile, with Dublin City Council (DCC) having recently recruited an overseas firm of consultants with expertise in the sector to assess how best to proceed.

With the projected cost of the original plan for a 10,000 seat stadium having escalated to more than €30 million, a revised proposal capacity of between 6,000 and 8,000 is generally expected. Delaney says he remains confident Bohemians and Shelbourne can both be playing football there by 2022.

“I’ve been in touch with the Minister [of State for Tourism and Sport Brendan Griffin] today about it,” said Delaney, “and I’d be hoping, or he’s hoping, that by the end of June, July, that the fund will be open for applications and the two direct beneficiaries out of that we would be hoping for would be Dalymount Park and Glanmire.

“Through DCC there will be an application for Dalymount Park and down here we have been working with Cork’s local authority; they’ve given us the land for Glanmire and we’ll be making a specific application for that. They are the two that are right up on our agenda.

“There are feasibility studies being conducted by DCC at the moment and I think that within the next short period of time they will probably be a position to identify the project that is best to look at going forward and that will take it along the line to an application being made to the National Projects Fund (officially the large Scale Sport Infrastructure Fund).

“I know Finn Park will be out of a separate fund when that gets approved and I know that Shamrock Rovers have more plans as well – we have already given them €180,000 but they have more plans and I’m going out to see those in June, just to see the next phase of it – so I wouldn’t say that we would be restrictive in terms of applications but those are the two that are right up there for us.

“Loosely, I’ve had discussions with DCC and loosely you are talking about the back end of 2021, early 2022,” he said when asked about the timeframe for the getting the new stadium up and running.

“That’s the timeframe that we are talking about but the most important thing is to pick the design of the project, what it’s going to be, make the application to the National Projects Fund and then get the work started. But I have no doubt that Dalymount will be redeveloped.”

Delaney, meanwhile, confirmed that the total contributed by businessman Denis O’Brien towards the salaries of the Irish side’s management teams over the past decade was €12.5, significantly more than had originally been suggested when it was announced the arrangement was ending back in March.

“I think it was €12.5million or something like that that he contributed over the number of years but we had planned for it at some stage for it not to continue. We knew in the contracts this time around that that wouldn’t be available. All I can do, quite simply, is thank him for his support at a time when it was very important to us.

“It helped us to raise the level I suppose of the remuneration and bringing in Trapattoni and Tardelli at the time, then Martin [O’Neill] and Roy [Keane]. So I thank him for what he did but we have to stand on our two feet which we’re doing now.”

When O’Brien first stepped in it was to help the association pay the roughly €2 million per annum required to hire Trapattoni. That figure dropped substantially as the association went through a major financial crisis linked to its stadium debt and the wider economic crash but having been hired for around half that, O’Neill is understood to be on much the same salary again now.