New government restates Memorandum of Understanding must be implemented in full 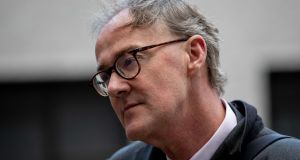 FAI independent chairman Roy Barrett has contested the claim that the association’s leadership had not sought approval from the Sports council for the organisation to agree the financial elements of the Memorandum of Understanding. File photograph: Inpho

FAI independent chair Roy Barrett has hit back at Fianna Fail TD Marc MacSharry for his use of Dáil privilege to criticise the current leadership of the association. He also accused the party’s former spokesperson for Sport of getting his facts wrong in comments made to the house on Thursday evening.

MacSharry, who has previously suggested he had an understanding with his party leader (now Taoiseach Micheál Martin) that the Memorandum of Understanding (Mou) signed between the previous Government and FAI back in January would be reviewed, described it as “absurd,” and “a disgrace” that the organisation’s current leadership was effectively ignoring the governance review conducted after John Delaney’s departure and seeking to bring in sweeping changes of their own.

He was also critical again of the proposal, contained in the MOU, that the make up of the board be altered so that six of the 12 directors would be independents, something that would, in the event that the Independent Chair retained the casting vote, give overall control to outside appointees.

“Instead of the corruption of the past,” he said, “it will be a new form of corruption.”

In a statement issued late on Thursday evening, Barrett expressed “disappointment,” that MacSharry had used Dáil privilege to make that assertion and contested his claim that the association’s leadership had not sought approval from the Sports council for the organisation to agree the financial elements of the Mou.

Barrett claimed that he made reference in a motion to the council in March - but widely taken at the time to refer solely to the banking element of the bailout - to “other borrowings” and that had actually covered the public funding aspect. “It is respectfully suggested that deputy MacSharry checks his facts before he next decides to use Dáil privilege,” Barrett said.

Earlier, Minister for Climate Action, Communications Networks and Transport, Eamon Ryan, had restated the new Government’s position that the MOU would have to be implemented in full before the almost €20 million worth of loans and additional grant funding provided for in the MOU and other, coronavirus pandemic related monies, would be released.

“There will be no renegotiation of the terms,” he said. “The FAI must convene an EGM this month to implement rule changes to provide for an increase to six independent directors on its board and for those members of the FAI Council with more than 10 years service to stand down.

“If these rule changes are not implemented, Sport Ireland will be unable to disperse any funds to the FAI including the Covid-19 support funding approved by the government last month.”

He went on to suggest that the effective loss of independence is a punishment for the failure of the Delaney era board, all since departed, to hold the then chief executive to account and for the wider mismanagement of the association.

“The FAI board and council ultimately failed in their duty to the association and its members, the grassroots club and the volunteers to hold the executive leadership to account,” he said.

“This is why government had to step in to provide additional funding to safeguard the future of Irish soccer and the livelihoods of over 200 people employed by the FAI. We will be monitoring carefully the progress on reform and if there are concerns that we are seeing a return to the old FAI, we won’t hesitate to suspend funding once again.”

1 Gordon D'Arcy: Ireland must go after victory by frightening France into mistakes
2 Robbie Henshaw likely to be the only Irish change for France finale
3 Seán Moran: Will a silent, empty Hill help to loosen Dublin’s grip on Sam?
4 Cian Healy: ‘Realistically I got away with murder when I was younger’
5 Warren Gatland: England players could miss Lions tour if not released for Japan warm-up
Real news has value SUBSCRIBE
Crossword Get access to over 6,000 interactive crosswords