Leicester pull themselves together to tear Blades apart 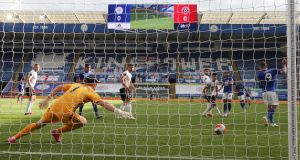 This is how a team redeems itself. After their wobbles degenerated into a full-scale collapse at Bournemouth on Sunday, Leicester pulled themselves together and tore Sheffield United apart here. Suddenly their ropey form and long injury list do not look like such a problem for Brendan Rodgers’s side, who reasserted the class that made them worthy contenders for a top-four finish.

Rodgers had described Sunday’s humiliation as a freak occurrence but he must have feared it was a low point from which his team’s confidence could not return, especially given a list of absences that kept growing, with Caglar Soyuncu’s suspension compounding injuries to a slew of first-choice players.

The Leicester manager had to reconfigure his defence and insisted that giving the 36-year-old Wes Morgan a first league start since December would bring more calmness to a team in the throes of a confidence crisis but it was a debutant nearly half the captain’s age who radiated the most impressive serenity as Leicester regained their dignity and form in style.

Nineteen-year-old Luke Thomas was entrusted with his first senior start owing to injuries to Ben Chilwell and Christian Fuchs. Operating at left wing back the teenager defended and attacked with such precocious poise that one understood why Leicester might not be worried about Manchester City or Chelsea making an extravagant bid for Chilwell this summer.

Given the context – a Champions League place-chasing team in the midst of a slump – Thomas’s contribution was sensational and yet in the narrow prism of this match, it was not a surprise when Thomas created the opening goal. Because he and Leicester started so strongly and brightly that Sheffield United, fielding the same side who thrashed Chelsea last weekend, looked powerless.

Chris Wilder’s team threatened in the second minute, when James Justin blocked a shot by David McGoldrick, but after that Rodgers’s side took over. Evidently the spirit that crumbled at Bournemouth was rebuilt following the frank exchange in the away dressingroom after that game.

Here Leicester flexed their muscles and flashed their wit like a team who had never really doubted themselves and were eager to chide others for losing faith. They were first to every breaking ball and passed and moved with a precision and speed that they have not shown since the league’s restart. United had to batten down the hatches to survive.

Thomas engineered the first clear opening for the hosts with a delicate cross from the left in the ninth minute, but Ayoze Pérez’s tentative header from six yards did not do it justice. Three minutes later Leicester’s other young wing back, 22-year-old Justin, delivered a clever cross from the right for Jamie Vardy, whose volley was blocked by Chris Basham before Dean Henderson saved the striker’s follow-up.

Harvey Barnes rampaged down the left, a storming complement to Thomas’s discreet excellence. Henderson was thankful to see a venomous shot from the forward deflected wide in the 20th minute. Soon the goalkeeper had to spring to his side’s rescue to foil Pérez and Youri Tielemans.

But Henderson never looked like stopping Pérez’s shot when Leicester finally forced the breakthrough just before the half-hour. After Pérez fed Thomas wide on the left, the youngster showed vision and cunning to play a disguised pass back to the striker at the edge of the area. Pérez drilled a low shot into the net to claim his first goal since January.

So Leicester went in at half-time with a lead reflecting their superiority. At Bournemouth that had been the prelude to a frightful unravelling but they were not going to allow a repeat here.

On Sunday Rodgers made a half-time substitution motivated by protecting the lead; this time his team went all out to extend it. Tielemans deftly presented Vardy with a chance to do just that early in the second half but the striker rammed his shot wide of the near post. Then Barnes missed two equally good chances after more fine play by the hosts.

That sort of wastefulness can cost a team no matter how well they are doing in other areas. United tried to punish them in the 63rd minute but Kasper Schmeichel – guilty of two uncharacteristic errors on Sunday – reprieved his team by making a fine save after John Egan’s header from a corner took a tricky deflection.

United did not test Leicester’s nerves again. Demarai Gray secured victory three minutes after his introduction, accepting a pass from Vardy and crowning a rapid counterattack with a crisp finish. – Guardian

No underage or minor GAA to be allowed under Level 5 Covid-19 restrictions 08:53
Ole Gunnar Solskjaer hails players after win over PSG 07:57
Rashford gives Man United another win in Paris; Gordon D’Arcy on Finn Russell 07:34
Seán Moran: Let’s leave the confusion aside and enjoy this All-Ireland 06:30
Gordon D’Arcy: Ireland don’t need to do a Finn Russell on it 06:00

1 Golf in Level 5 Covid restrictions: Clubs still waiting to hear if they can remain open
2 Gordon D’Arcy: Ireland don’t need to do a Finn Russell on it
3 Hugo Keenan could start in changed Ireland team against Italy
4 Seán Moran: Let’s leave the confusion aside and enjoy this All-Ireland
5 Aki, Ringrose and Henshaw: Brian O’Driscoll has his say on Ireland’s midfield riddle
Real news has value SUBSCRIBE