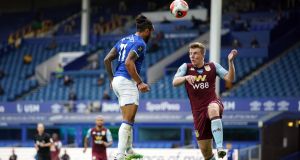 Despair arrived late and courtesy of goalline technology for Aston Villa at Goodison Park. Dean Smith’s side were a few minutes from a crucial and merited victory at Everton, one that would have heightened the pressure on Watford and West Ham, but Theo Walcott’s late equaliser left his players on their knees at the final whistle. Their escape route appears increasingly fraught.

The Villa manager had admitted the game was a must-win for Villa in their bid to avoid relegation and they were on course for only a third away victory of the campaign when Ezri Konsa opened the scoring late on. The visitors should have had more, Anwar El Ghazi missing a gilt-edged opportunity for a second, but Walcott’s header, awarded by the signal on referee Anthony Taylor’s watch after it just crossed the line, represented a potentially fatal blow to their survival prospects.

Everton’s manager, Carlo Ancelotti, had demanded a reaction to Sunday’s abject display at Wolves, to which he responded by making five changes, and there was certainly more energy and purpose to his team’s start. But it was not sustained. Dominic Calvert-Lewin sent a bicycle kick over Pepe Reina’s crossbar in the opening minute and almost scored a fluke when Tyrone Mings glanced Richarlison’s cross on to his chest as he closed in on goal. The rebound looped over with the Villa goalkeeper stranded. Bernard also accidentally hit the bar with a cross before the hosts’ bright opening was disrupted by the early departure of Mason Holgate.

Holgate had missed Everton’s last two games with a shin injury suffered at Tottenham and hobbled off after appearing to aggravate the same problem.

With Yerry Mina also injured Ancelotti had no alternative but to hand a home debut to Jarrad Branthwaite, the 18-year-old signed from hometown club Carlisle United in January for £750,000. The teenager was given a painful introduction when Mings clattered into him and landed on his head at a Villa free-kick, but otherwise enjoyed an assured Goodison bow.

It took a while for Villa’s performance to reflect the urgency of their predicament but, gradually, the visitors threatened through the gaps behind Everton’s central midfield and a series of inviting crosses from the right.

Jack Grealish released Trézéguet inside Everton’s penalty area only for the forward to over-run the ball and allow Séamus Coleman to intercept. Mbwana Samatta squandered a decent opportunity having peeled away from Michael Keane to meet Ahmed Elmohamady’s excellent delivery. His header, high over Jordan Pickford’s bar, illustrated the flaws that have hindered Villa all season.

The visitors’ confidence and composure increased throughout the first half, with Grealish and Douglas Luiz both shooting over, but they needed the clinical touch to capitalise when on top. There was a glaring absence of creativity from both teams, in fairness.

Villa were on top immediately after the restart, by which point Everton’s encouraging reaction to Ancelotti’s stinging pre-match criticism had faded into distant memory. Grealish should have at least tested Pickford when picked out by John McGinn’s fine crossfield pass. The Villa captain attacked Coleman inside the area but dragged a shot well wide of the near post. He was also off-target with another effort from the edge of the box but the visitors stayed patient, continued to stretch Everton, and were eventually rewarded with the late breakthrough. An ugly goal was a thing of beauty in Villa eyes.

Conor Hourihane created the opener with a delightful free-kick following a foul by André Gomes. His delivery, from the productive right flank, was drilled in behind the Everton defence and begged for a Villa player to apply the finishing touch. Two responded. Substitute Keinan Davis connected with a diving header that sent Pickford sprawling to his right. Konsa, however, arriving behind the striker, diverted the header past the goalkeeper’s left with an outstretched foot for the first Premier League goal of his career. It should have been the platform for a priceless victory.

El Ghazi missed a glorious chance to double Villa’s lead when Grealish picked him out with a perfect cross from the left. The substitute stole in behind Lucas Digne and only had to convert from two yards out but somehow steered his volley high and wide of Pickford’s exposed goal. A crucial moment.

Everton had created nothing in the second half but finished strongly as Villa’s understandable anxiety to hold on to what they had invited pressure. Calvert-Lewin swept wide when Gomes found him unmarked six yards from Reina’s goal and, with two minutes of normal time remaining, the visitors were undone.

The Portugal midfielder was again involved, delivering a deep cross into the Villa area where substitute Walcott sent a header looping over Reina and over the line despite the desperate attempts of Konsa to hook clear. – Guardian