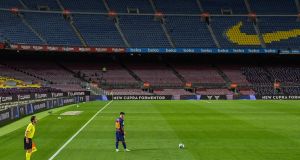 Lionel Messi takes a free-kick for Barcelona during their draw with Atletico Madrid. Photograph: David Ramos/Getty

Since retiring from football 15 years ago, Christophe Dugarry has made a bit of a name for himself in the punditry department, sort of becoming France’s equivalent of Roy Keane - ie he can be quite rude about players and managers.

Not everyone has taken his criticism lying down, Patrice Evra, for example, once responding to a Dugarry tongue-lashing by suggesting that he wouldn’t have won half his 55 French caps if he hadn’t been such a good pal of Zinedine Zidane. “I think he is the only person in the world who knows the number of pubic hairs that Zidane has on his family jewels,” said Evra. No, he did.

Anyway, you might have heard that Dugarry got himself in to hot water last week when discussing Antoine Griezmann’s struggles at Barcelona, suggesting that the root of his troubles is that he is intimidated by Lionel Messi.

“What is he afraid of,” he asked. “A kid who is 1.5 metres tall and half autistic?. All he has to do is show some balls at some point. I’ve been saying for a year that he has a problem with Messi. He has to hit him in the face.”

To which you can only say: cripes. The apology soon followed. “I’m sincerely sorry for the breadth and depth of my remarks about Lionel Messi. I didn’t want to stigmatise people with autism disorders, that was not my intention. I apologise to the people I shocked.”

“I’d spent most of lockdown getting jobs done in the house, then Middlesbrough came out of the blue. **** the kitchen. I can build a kitchen any time.” An unrepentant Kevin Blackwell on abandoning his DIY projects to return to assistant management.

648 - Gianluigi Buffon’s record number of Serie A appearances, the Juventus goalie passing Paolo Maldini’s mark on Saturday. He made his debut in 1995 ... four years before team-mate Matthijs de Ligt was born.

“Xherdan is not a champion. Over the years he has often followed the games of his teams as a spectator. And millions have been paid for him. Of course, he is seeing his bank account grow dramatically, but I don’t know how many, in 10 years, will remember him.” Arno Rossini, who has coached a bunch of Swiss clubs, offering warm congratulations to his compatriot Xherdan Shaqiri after he became, well, a champion with Liverpool.

“We are talking about Man United getting into the top four here - not long ago it was all about being the top one.” Dimitar Berbatov on how the mighty have fallen.

“I think they drunk a lot of beer the last week, but they were here with no beer in their blood and to win this game.” Pep Guardiola on Liverpool after their, eh, sobering 4-0 defeat by Manchester City.

How stringently is the Premier League policing its clubs’ adherence to its coronavirus rules since they returned to action? According to Watford gaffer Nigel Pearson, very.

“I have found it irritating at times, but also quite amusing that we have someone sitting and making notes of players’ spitting when it is 32 degrees and giving us a slap on the wrist,” he said to Sky Sports. “You try going out there.”

Aside from spit-counting, anything else? Oh yes. “I have to smile when I see the Premier League at the training ground marking us down on simple behaviours. We even caught one looking through our bins. That was hilarious. Our club secretary caught him doing it.”

Tribute of the Week: We’ll go with this highly lusty one paid by Tostao, while talking to Fifa.com, to his one-time Brazilian team-mate Pele.

“I think Pele was better than all of them. For me there’s no comparison. Pele was far more complete. Maradona was spectacular, but he wasn’t on Pele’s level physically, he didn’t score the numbers of goals Pele did. Messi’s spectacular, but he doesn’t head the ball like Pele did, he doesn’t shoot as well with both feet, he doesn’t pull off the moves that Pele did. Cristiano Ronaldo is an exceptional player, but he doesn’t have the ability that Pele had and he doesn’t pull off the incredible passes that Pele did. If you take the qualities of Cristiano Ronaldo and Messi, put them together, then you’d have a player to compare to Pele.”

The Pele of all tributes, that.

1 ‘Embarrassment, anger, sadness’: the decline of the great Stephen Hendry
2 Inside the world’s largest sports air dome just outside Knock
3 Mikel Arteta given more control at Arsenal as Raul Sanllehi leaves
4 Worst sporting moment: White knuckle ride on a hate-filled night at Windsor
5 As ever, Ronnie O’Sullivan sparks debate at the Crucible
Real news has value SUBSCRIBE
Crossword Get access to over 6,000 interactive crosswords