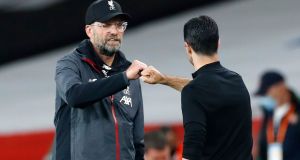 Manager Mikel Arteta says the task of rebuilding Arsenal is a “massive job” and that there is an “enormous” difference between his side and Premier League champions Liverpool.

Arsenal beat Liverpool 2-1 on Wednesday but the London side are still ninth and trail the champions by 40 points.

“You can see how Liverpool build their squad and there’s no magic, you need to improve the squad with quality players,” Arteta told Sky Sports

“And we need a bigger squad to compete in this competition. That’s the challenge. It’s a massive job. You only have to look at the difference between the two teams - it’s enormous.”

Arteta, who replaced Unai Emery in December, said that while quality was an issue, Arsenal were a match for Liverpool in other areas.

“The gap in many areas we can’t improve in two months but the gap between accountability, energy, commitment and fight between the teams is now equal,” Arteta added.

“Before it wasn’t like this. I’m very proud of that. The rest will take some time but at least we’ve got that now and my message to the players is with that we can create something.” Arsenal take on Manchester City in the FA Cup semi-finals on Saturday.

Meanwhile Liverpool manager Jurgen Klopp said his side’s errors in their defeat at Arsenal were simply too big to come back from, despite his side having dominated the game.

Having gone a goal down in the 20th minute, Arsenal pounced on a clumsy back pass from defender Virgil Van Dijk and later a miskicked ball out from keeper Alisson to score twice, ending the Reds’ hopes of breaking the record point tally for a Premier League season.

“Scoring and going 1-0 up, and then taking kind of a break. We’re all humans and maybe it’s just a misjudgement of the situation,” he said.

Since winning the title with seven games to spare, Liverpool have dropped eight points in five games. Prior to that they had dropped only seven points all season.

“I’m disappointed with the result of course,” Klopp said. “The numbers I saw was 24-3 (shots on goal), 70 per cent to 30 per cent possession, all for us - that’s exceptional. But the result is the truth, and we accept that and we are responsible for that result. We have to make sure things like this will not happen again.”

Liverpool have 93 points and can stretch that to 99 if they win at home to Chelsea and beat Newcastle away in their last two games. Manchester City notched a record 100 points for a season in 2017-18.

Van Dijk agreed with his manager’s thoughts. The Dutchman said: “Obviously the goals we gave them were a present. Until the first goal it was totally us and we were dominant. But if you give goals like that away, including myself, you get what you deserve.

“Goals like that shouldn’t happen and it happened twice tonight. Until I make the mistake, we did nothing wrong. I take the blame for it, of course, I take it as a man and we move on.

“We wanted to win the game and we can’t blame it on the fact that we are already champions. We will try to win the last two games and then get a well-deserved break. We have had a fantastic season.”