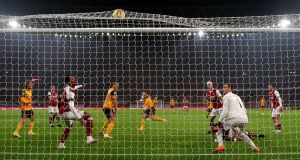 Pedro Neto scores the first goal of the game at the Emirates Stadium. Photograph: PA

The most important news to come out of an unsettling evening is that Raúl Jiménez, who had departed with a head injury that left onlookers fraught with worry, was conscious and responding to treatment by the time he reached hospital. Jiménez was carried off on a stretcher after colliding horribly with David Luiz in the fourth minute, an incident that prompted a lengthy stoppage and significant concern over the Wolves striker’s health.

Information about his prognosis will emerge in time and there will also be heightened discussion about football’s response to head trauma, given a clearly hurt David Luiz was allowed to play on until half-time. But Wolves may at least feel better placed to enjoy an impressive win, earned through first-half goals by Pedro Neto and Daniel Podence, that places them sixth and piles on the uncertainty for a disjointed Arsenal.

The sight of Jiménez being carried down the tunnel, while Wolves’ staff and substitutes anxiously strained to discern news of his condition, cast a shadow over everything that followed. Clashes of heads are often described as sickening and the noise from this one, which occurred as Jiménez and David Luiz hurled themselves at a near-post Willian corner, drew gasps in the stand and obvious distress among those nearby. Two medics from each team raced on to the pitch as both players lay motionless, and it became clear Jiménez had taken the more serious blow.

A bloodied David Luiz rose, looking groggy, and took treatment by the side of the goal while Jiménez was steadied for the stretcher. The striker received oxygen and was eventually carried off around the perimeter, after a delay of 10 minutes, to the concern of players from both sides. It seemed unbelievable that a David Luiz could continue but the game restarted with him back in Arsenal’s defence. Blood could be seen seeping through his head bandage as he played on. While nobody would doubt the club’s medical staff applied the necessary checks within Premier League rules, it laid bare the inadequacy of protocols that do not permit temporary substitutions in cases of potential concussion.

The players gathered themselves and, somehow, presented a watchable spectacle. Wolves deserved their half-time lead, justifying Nuno Espírito Santo’s decision to send them out in an uncharacteristically fluid 4-2-3-1 setup for the second consecutive game. Neto’s goal came after Adama Traoré, starting in the league for the first time since September, scorched a trail past Kieran Tierney and chipped across from the byline. Leander Dendoncker should have capitalised but headed against the bar; Neto reacted smartly to render that immaterial.

Arsenal’s quest for a Premier League goal from open play had now passed the 500-minute mark but they found a quick equaliser, imperiously headed in by Gabriel Magalhães after Willian had worked a short corner with Héctor Bellerín. But Wolves still carried the threat, Bernd Leno saving from Dendoncker and Neto fizzing across goal before they struck again. More fine work from Traoré led Neto to uncork a deflected shot that squirmed away from Leno; again a Wolves player was sharp to the rebound, Podence taking a slick touch past Gabriel and squeezing his effort home. Traoré could then have made things worse but shot into the side netting then clear.

David Luiz did not appear for the second half, further begging the question of what logic had allowed him to carry on in the first place. Bukayo Saka passed up a presentable opportunity to level again, miscuing Bellerín’s cross, but Wolves’ incursions continued to ooze greater fluidity and menace.

After another of their rapier raids down the flanks, Traoré was unfortunate to be booked for a dive by Michael Oliver given replays suggested Gabriel had trodden on his toes inside the area. The centre-back had earlier undergone treatment for a head injury of his own, sustained as he blocked a João Moutinho drive. Wolves, in these moments and plenty more, were operating with the kind of creativity and cohesion that routinely eludes their hosts.

That said, Arsenal were not bereft of threat. Saka looked their likeliest source of inspiration and centred agonisingly above Pierre-Emerick Aubameyang. The ball reached Rob Holding, who had replaced David Luiz, but he could not direct it on target.

Some jitters were starting to perforate Wolves’ game. A loose touch by Rui Patrício allowed Aubameyang to steal possession and the keeper was fortunate Conor Coady raced back to block the resulting shot. The substitute Reiss Nelson then blazed over from beyond the far post. Nuno responded by introducing Max Kilman and seeing things out with a back three, his preferred shape until the past week.

Wolves’ players did enough, and thoughts could turn again to the condition of their teammate. - Guardian