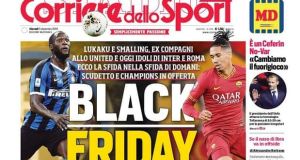 The Italian newspaper Corriere dello Sport has been heavily criticised for a front page with the headline “Black Friday” in regards to the former Manchester United teammates Romelu Lukaku and Chris Smalling facing each other on Friday.

Above the headline, the paper wrote: “Lukaku and Smalling, former teammates at Manchester United and today idols at Inter and Roma, this is the battle within the battle tomorrow with the scudetto and a Champions League place at stake.”

The paper was universally condemned, with Smalling’s club, Roma, taking to social media to show their disgust at the front page, tweeting: “No one. Absolutely no one. Not a single soul”, before the words “Corriere dello Sport headline writer” and a picture of the front page.

Inter did not reference the newspaper article, but tweeted: “Football is passion, culture and brotherhood. We are and will always be against all forms of discrimination.”

Not a single soul:

The organisation Fare network, which works against discrimination and for social inclusion in football, also tweeted, saying: “The media fuels racism every day. This is today’s edition of Italian sport daily Corriere dello Sport.”

In the article the newspaper appeared to attempt to highlight the league’s racism problem. “In the faces of those idiots who boo, tomorrow everyone must instead go ‘oooh’ like children. It will be a Black Friday, but this is not an end-of-season sale,” the article said. It went on to describe Lukaku and Smalling as “two giants of colour”.

Lukaku and Smalling have both made successful starts to their careers in Italy. Lukaku has 10 goals in 14 Serie A games with Inter top of the league, one point before Juventus. Smalling has been an ever-present since making his debut against Atalanta towards the end of September, having scored two goals and provided one assist.

Serie A has again been plagued by racist incidents this season, with Lukaku himself and the Brescia forward Mario Balotelli among those to be racially abused by supporters during games. An Italian TV pundit was also sacked for saying the only way to stop Lukaku was to give “him 10 bananas to eat”.

Only last week all 20 clubs in Italy’s top tier signed an open letter which called on “all those who love Italian football” to unite to try to eradicate its “serious problem with racism”. – Guardian

1 Owen Doyle: Creeping professionalism of schools rugby a threat to the game
2 Champions Cup: Leinster will meet Saracens on Saturday evening
3 GAA officials and referees brace themselves as new rules kick in, and this time it's for real
4 Scotland’s Finn Russell missed training after Sunday drinking session
5 Ole Gunnar Solskjær insists he is up to the challenge at United
Real news has value SUBSCRIBE
Crossword Get access to over 6,000 interactive crosswords