FAI step up moves to appoint an independent chairperson 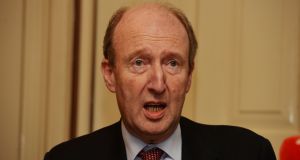 Shane Ross: “We’ve got to see an organisation which is independent of what’s happened in the past – that’s terribly important.” Photograph: Alan Betson

A new independent chairperson for the Football Association of Ireland has been identified, but is analysing the organisation’s travails before deciding whether to take up the role.

The appointment of an independent chair and three directors has been identified by Minister for Sport Shane Ross as a key milestone on the road to restoring State funding to the FAI.

The person was identified by the nominations committee of the FAI, despite no members knowing the identity of the person concerned, the organisation told the Oireachtas sport committee in a letter sent on Thursday evening.

“This individual is currently undertaking a thorough analysis of current issues and concerns within the FAI. The nominations committee has agreed to await the outcome of this exercise before completing its work.”

The person was identified along with three other independent directors based on profiles provided to the FAI committee by Amrop, the external consultant running the process. The other individuals are also being “afforded the opportunity to receive a briefing on current issues and concerns”.

The news comes as the chair of the Oireachtas committee indicated that he will move to invite evidence from former international player Niall Quinn, former Ireland manager Brian Kerr, and other members of a group including FAI employees advocating for reform of Irish football.

The group is arguing for a split of the FAI into a professional organisation and a grassroots organisation, along the lines of a similar scheme in Wales. It is also pushing for reforms in how the FAI is governed, specifically the process of board members being appointed by the FAI council.

The council is itself drawn from members of the grassroots clubs and leagues. Insiders have argued that maintaining control over these organisations was a key tactic employed by John Delaney, which helped him influence the composition of the board.

However, some sources said such a fundamental reorganisation of the way Irish football is run, at the same time as the FAI is in crisis, could prove too significant a challenge.

The group is seeking meetings with politicians and senior civil servants to enlist support for their plan. The sport committee is likely to sign off on an invite for the group to appear before it in January, Mr O’Dowd said, welcoming the “experience” of Mr Kerr and Mr Quinn. The group is being helped by Labour party Senator Aodhán Ó Riordáin.

Mr Ross said he was open to talk to anybody with “constructive suggestions about the FAI, because the FAI is a complete and utter basketcase, it’s in a very, very dark place at the moment”.

“If we’ve got people like Brian Kerr and Niall Quinn who are going to make suggestions, I would be very happy to talk to them about it.”

He said the Government’s interest is in protecting funding – the €2.9 million in Sport Ireland funding which is given to the game every year. The Government is devising a mechanism to channel the money into the grassroots without it going through the FAI, which Mr Ross said he hoped would be ready by next week.

“The Government can’t believe the association which runs Irish football has sunk to such an awful low,” Mr Ross said.

“What we cannot believe – and I cannot understand, and I think is quite unforgivable – is that the independent directors who were promised to us for so long have still not been appointed by the FAI.”