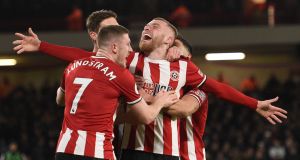 David Moyes and Chris Wilder have spoken in high regard of one another this week, but on the day the latter’s contract extension until 2024 was announced at Sheffield United, he could not have wished for a better gift from his opposite number’s side to mark the occasion as the Blades’ first season back in the Premier League continued to flourish here.

Prior to the goal from Oli McBurnie which ultimately decided this encounter and moved United back up to fifth, there was little to separate the sides. It always felt as though it would be a moment of either inspiration or madness from someone to break apart a 1-0 contest: in the end, it was the latter.

Goalkeeping issues have plagued the Hammers long before Moyes’s arrival last month, but is a trend that continued here. Lukasz Fabianski’s departure – after pulling up from a goal kick, the same scenario which had kept him out for three months – with the game barely 15 minutes old here, but the fact his replacement had a direct hand in the only goal will have been doubly hard for Moyes to take – especially with VAR denying the Hammers a last-ditch equaliser too.

Moyes admitted he wanted his Hammers side to be tactically flexible in the build-up to the game, a notion which was underlined here by the decision to revert to a five-man midfield, with Pablo Zabaleta operating on the right, and Aaron Cresswell playing in a central three at the back. However, it was the hosts who settled best when John Egan glanced a header just over Fabianski’s bar.

Two minutes later, however, and Fabianski’s evening had come to a frustrating end. The Polish international was starting just his fourth game after returning from a hip muscle injury, but after pulling up following a goal kick here, he was withdrawn after 14 minutes, with David Martin coming on in his place. With a move for Darren Randolph being held up due to injury – though the Hammers remain keen on signing the Republic of Ireland international – Fabianski’s departure was far from ideal.

His replacement here was almost immediately called into action, too. With United pressing, a fine free-kick from John Fleck was not properly dealt with, and only a last-ditch block from Fabián Balbuena prevented Martin from having to deal with John Lundstram’s goal-bound shot. Moyes’s decision to match Sheffield United up formation-wise was keeping the hosts at arm’s length – but it was also limiting their opportunities going forward.

However, their first real chance arrived on the half-hour mark. When a routine ball forward was not dealt with by Egan, Felipe Anderson snuck in behind, but the Brazilian could only drag wide of Dean Henderson’s goal in what proved to be the visitors’ only real opportunity of a low-key first half. The fare was perhaps best summed up seconds before the break, when Jack O’Connell’s attempted cross ended on the head of a West Ham supporter behind the goal, rather than his own team-mate.

With the Blades struggling to break down a resilient Hammers side, Martin’s pass to Balbuena was wayward: and the hosts capitalised. Fleck kept his nerve, squared for McBurnie and, just like that, it was very much a feeling of new manager, same old problems for a side still deep in trouble at the bottom of the table.

But when Martin’s terrible pass was seized by Fleck, who in turn allowed McBurnie the easiest of opportunities to score his fourth of the season, it felt like a pivotal moment for the contest. It certainly stirred the visitors into life; seconds after Robert Snodgrass’s arrival from the bench, his free-kick was turned in by Sebastien Haller: only for the offside flag to deny the striker.

There was still time for more late drama, though. In injury time, Snodgrass thought he had rescued a point after firing past Henderson – but VAR intervened after a handball from Declan Rice. It was a frenetic ending to a game which, prior to Martin’s moment of madness, had offered little in the way of drama.

The night began with the travelling supporters goading Sheffield United with taunts relating to Carlos Tevez and the infamous history between these clubs. This result will not have completely healed those deep wounds Sheffield United supporters still carry: but it will certainly have helped. – Guardian