United boss: ‘He knows why he hasn’t played as much. We’re taking our time with him’ 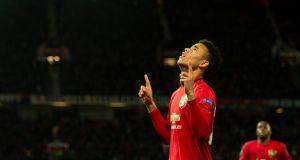 Ole Gunnar Solskjaer is certain Mason Greenwood will have “a very big career” at Manchester United — just as the manager is sure about the long-term benefits of taking the teenager out of the limelight at times.

Having got a taste of first-team football last season, the 18-year-old set tongues wagging during pre-season with some fine goals and promising displays that led to effusive praise from the United boss.

Solskjaer went onto describe Greenwood as one of the best finishers he has ever seen on the eve of his first senior goal against Astana — a superb September strike followed by another against Rochdale the following week.

The teenager had to wait until Thursday to add to that haul, showing composure and skill to put United on course for a comprehensive 3-0 win against Partizan Belgrade in the Europa League.

That was Greenwood’s first start in five weeks — a period in which he dropped down to play for the Under-21s in the EFL Trophy — as Solskjaer focuses on developing the teenage talent correctly.

“Mason is going to have a very big career, but sometimes is not the right time to play him,” the former United striker said.

“He knows why he hasn’t played as much. We’re taking our time with him.

“It’s been a difficult period. Anthony (Martial) has been away, to put all the weight on his shoulder wasn’t right either.

“I think we are finding the right balance between playing him, resting him and training him. He needs to learn the man’s game.

“He’s gone up from the Under-18s last year, now he’s training with the first team every day and you can’t just turn that switch on and off.

“You’ve got to perform every day if you are going to be accepted by a group like this.”

The last comment was striking as Greenwood has been given an elevated role due to the summer exits of Romelu Lukaku and Alexis Sanchez to Inter Milan.

Asked if he had not wanted to heap pressure on the teenager during Martial’s recent injury lay-off, Solskjaer said: “Not really.

“If he’d really stamped his authority in training every single day and been the best option, he would have played every game, but as a young boy you expect ups and downs and he’s had some downs. But I think he is on his way up again.

“You always get assessed on results now, but the DNA of this club — and it’s always been in our philosophy and my philosophy to give young players with the right attitude a chance and if that takes a couple of years for him to really, really come through, it’s worth it for us.

“I am managing for the best way I think we can get the best out of Mason.”

Solskjaer acknowledged a comparison between the finishing of Greenwood and former United striker Robin Van Persie, as well as nodding to a personality as adaptable as his footwork.

“He is very composed as well with his finishing,” he said of Greenwood, who last month signed a new and improved contract until at least 2023.

“It is just what he does it is natural to him. Right foot, left foot — I don’t think he still knows which is the best one, which is very difficult for defenders to defend against. He’s doing his finishing practices.

“I can see it every day. The good thing is he can do it at Old Trafford in front of a full crowd or 62,000, he doesn’t get fazed by the occasion. He’s still composed.

“Whether that’s a game with his mates in the park or a cup final he will still finish the same or Premier League, hopefully.”

That positive, unruffled personality appears to have helped Greenwood shrug off being dropped to the Under-21s for the recent EFL Trophy match at Doncaster by scoring a late decider dedicated to his late grandmother.

“He scored a winner in that game against Doncaster, which always gives players confidence,” Solskjaer said ahead of Sunday’s Premier League clash against Brighton.

“That was more important for him to play that game and 90 minutes to be ready for these games instead of being on the bench the day after against Chelsea.”