Michael Walker: As Middlesbrough go to QPR they have not scored in their last four games 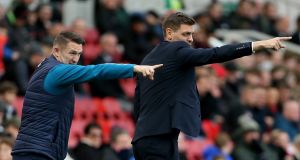 Middlesbrough assistant Robbie Keane and manager Jonathan Woodgate: “I’ll tell the fans this is going to be rocky. We’re in a transitional phase, so you will have to be patient.” Photograph: Richard Sellers/PA Wire

It was early July and Middlesbrough’s new management team of Jonathan Woodgate and Robbie Keane were having their first outing on English soil. It was at Gateshead, a low-key pre-season friendly after a training camp in Austria. It was a warm night and a few hundred Boro fans had made their way north from Teesside.

A far from grand occasion, it nevertheless held meaning for Woodgate and Keane. This was the beginning of their first frontline effort together at management. While Woodgate patrolled the technical area offering advice and encouragement, Keane also stood. He leaned his left shoulder against the Perspex dugout.

Fifteen minutes into the second half, as he did so, a pass was played through to the Boro striker Ashley Fletcher. It left him free around 14 yards from goal and as he shaped to shoot, the eye was caught by Keane. He was doing the same, instinctively.

Keane was about 40 yards away, but as Fletcher’s right leg bent to strike so did Keane’s. The shot went in. Keane applauded.

It was like one of those moments when you see a manager mime heading the ball as a cross comes in for his team in front of goal. It shows how wrapped up in a game coaches become. It reminded you Keane retired from playing only last year.

Middlesbrough won 3-1 in Gateshead, albeit against a team from the sixth tier. When, three weeks later, the Championship season began with Boro’s trip to newly-promoted Luton Town on a Friday night and Fletcher scored the opener in a 3-3 draw, it seemed Keane was having the effect desired by Woodgate.

“Can you imagine the young players at this football club learning from Robbie Keane?” Woodgate had asked on their unveiling in June.

They were taking over from Tony Pulis, and there was an emphasis on goals. Under Pulis Boro had scored 49 in finishing seventh. It was dull. Relegated Rotherham scored more.

“If you look at this league now, you go up by scoring goals,” Woodgate said, which seemed telling. As did: “If you don’t, you won’t go up. If you look at my backroom team...we’ll have that in abundance, especially with Robbie by my side.”

On that night at Luton the pair who first knew each other at Leeds 18 years ago may have felt like change had come.

Britt Assombalonga missed a penalty, so Boro could have been 4-2 up. But Keane must have had some satisfaction: his two forwards, Fletcher and Assombalonga, had a goal each. They were up and running. On to Brentford at home.

Next Blackburn away. Boro lost 1-0.

Relieved, Woodgate was realistic. “I’ll tell the fans this is going to be rocky. We’re in a transitional phase, so you will have to be patient.”

Those words were wise and accurate. Middlesbrough have played 11 Championship games since Wigan and have won one. There have been five draws and five defeats, and Boro are third-bottom, in the relegation zone.

What is more striking – or not – is that in 15 games Boro have 11 goals. They are the lowest scorers in the division. Assombalonga has four goals; Fetcher hasn’t scored since Luton. Keane may be observing them and pondering how the former cost Boro £15 million and that latter £6.5 million.

“Robbie’s working as hard as he can on the training pitches,” Woodgate said. “There’s not many more shooting sessions we can do.”

The hopes of early July made way for the drought of late October. As they prepare to go to QPR, Boro have not scored in any of their last four. Their last goal was on October 4th at Birmingham, and six of their next seven opponents are against play-off contenders or automatic promotion candidates such as Leeds, Swansea and Nottingham Forest.

Woodgate’s appointment was not universally welcomed on Teesside despite his status as a local hero. Keane was also seen as something of a gamble. Both men could say they have been dealt a weak hand. Boro made a £10 million profit on sales this summer.

Understanding of their situation, however, is eroded by results, and so the last thing the young managers need is an injury crisis. Yet Darren Randolph is one of nine or 10 first-team squad men who will be unavailable at Loftus Road. With Fletcher and Rudy Gestede out, Keane has been given a lad called Tyrone O’Neill to work with alongside Assombalonga.

With a name like that, O’Neill (20), on loan at Darlington, is probably on an FAI or IFA database.

“It’s huge for us to have to do that, a big thing,” Woodgate said of O’Neill’s recall. “That’s where we are.”

He added: “It’s an opportunity” for the young man, but it may not feel like it, even if QPR are hardly Brazil 1970.

And the opportunity of Middlesbrough may not be quite how Keane envisaged it. He still participates in training, cocks his leg to shoot and scores goals, but he wouldn’t be the first former player to discover that where his new club really need him – on the pitch – has come about 10 years too late.

Then again, as Keane said last month at a Uefa course in Nyon, Switzerland, his playing career does not guarantee a coaching career.

“You know how to deal with the media as a player, so you already kind of half-understand, so you’ve already got a foot forward in terms of some of the hazards. But that doesn’t mean that you’re still going to be as good as coaches who haven’t played.

“I love positivity, I would love everyone to be like that,” he said as thoughts move to QPR. “I take everything on board. You can’t expect positivity when you are where we are. But you have to keep on going.”

Middlesbrough are not minded to make a change apparently. But this is football. How Woodgate and Keane could do with a goal.