‘We look harder to beat at the moment, we have people who can create and score goals’ 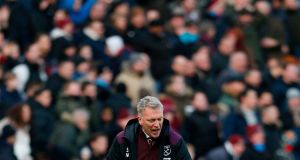 David Moyes admitted his relief at getting his first win as West Ham boss.

The Hammers, who impressed in defeat at Manchester City last week, beat Chelsea 1-0 at the London Stadium thanks to Marko Arnautovic’s early goal.

“The win was the biggest thing, to get a win in the Premier League is really hard especially against the champions,” the Scot said to Sky Sports.

“The spirit of the team, how they stuck together pleased me. The basics were in the main done well.

“I got a big boost from the performance at Manchester City, we didn’t take any points from it, but there was something to talk positive about.

“We look harder to beat at the moment, we have people who can create and score goals so if we can get the back end sorted we might give ourselves a chance of earning some points.

Hammers skipper Mark Noble praised the effect Moyes has had since he arrived at the club.

“We have got a great bunch of players who work hard for each other,” he said.

“We didn’t have the rub of the green in the first part of the season, but I think the manager has come in and solely concentrated on the team shape and not conceding goals and I think that showed today.

“I watched the boys fight and play well against Manchester City and to play the way we did and then come home and play Chelsea, a fantastic team, to get a 1-0 win and defend for our lives at times but that’s what we have to do, it was a massive, massive victory.”

Arnautovic has received criticism for his displays since a big-money move from Stoke, but was delighted to get his first goal for the club.

“We had to work hard, as strikers we had to do many other jobs,” he said. “I can describe my feelings, it was just amazing and all the players were just amazing and I think we deserved three points.

“I wanted to do it from my first day when I started at West Ham but it was a difficult time.

“I don’t want this to be my last goal, I want to make the club’s fans happy.”

Chelsea defender Gary Cahill was blunt in his assessment of his side’s performance.

“We were not at the races today, whatever the reason, it is very disappointing,” he said. “If we play to our levels we get something out of the game, but we didn’t so we didn’t.”