Irish players McCann and Gallagher enjoying playing in front of 50,000 every other week 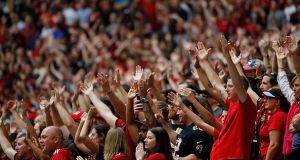 Atlanta fans produce their own version of the ‘Thunderclap’ against Toronto FC at Mercedes-Benz Stadium. Photograph: Kevin C Cox/Getty Images

Last Saturday, Atlanta soccer fans hauled themselves to Mercedes-Benz Stadium to watch Atlanta United FC take on LAFC in Major League Soccer. It wound up being a one-sided affair with the hometown heroes trouncing their West Coast visitors 5-0. Hardly a contender for MLS match of the season, but consider this: a whopping 45,207 fans attended the fixture. To put that into perspective, 41,324 fans watched Chelsea play West Ham last weekend.

A team in the MLS attracting bigger crowds than a Premier League side was once unthinkable, but Atlanta United FC have been exceeding expectations since they made their MLS debut last year.

Founded by Arthur Blank, owner of NFL franchise the Atlanta Falcons, the team was tapped as an MLS expansion team in 2014. Eighteen months before they started playing, they had signed up 26,000 season-ticket holders. In 2016, they appointed former Barcelona coach Gerardo “Tata” Martino as manager. In March 2017, they played their first match in front of more than 55,000 spectators. The message? Atlanta were a force to be reckoned with.

It’s amazing. The atmosphere, the way people have embraced it, to play in the stadium we play in every week – that’s what you play football for.

Since then, they have established themselves as the most popular team in Major League Soccer, regularly smashing attendance records. Last month, they broke the MLS single-game attendance records with over 72,035 tickets sold and distributed for their season debut. The previous record holders? None other than Atlanta United FC.

Additionally, they have established themselves as legitimate title contenders. In their first season, they finished fourth. As of writing, they are second in the Eastern Conference having won four of their first five games.

“It’s been pretty surreal, to be honest,” says McCann. The Irishman joined Atlanta after years of toil with Burnley and Wigan. In 2016, he was assessing his options when he was approached by Paul McDonough, director of soccer operations with Atlanta.

“I was in Vegas on my holidays and he said, ‘While you’re in America, stop off and check the place out.’ When I checked it out, I was torn between going back to England or coming here.”

Atlanta had a lot going for it – the lifestyle, the weather, the prospect of a new challenge. Most important, however, was the contract.

“The contract was a big thing for me – the security,” explains McCann. “It’s a long enough deal for me, which I wasn’t getting in England. Kind of everything pushed me down this route of saying, ‘Let’s just take a chance.’”

And take a chance he did. After a spell on loan with Coventry, the defensive midfielder made his debut with Atlanta last spring and made nine starts over the season. This season, he has been a regular on the starting 11 and found his rhythm somewhat.

While the MLS has a reputation as being a sort of active retirement home for elite players in the twilight of their careers, McCann has been pleasantly surprised by the standard of play he has encountered.

“People were saying, ‘You’re going out there, you’re going to play in a league that everyone goes to when they’re finishing their career’. I think when people get that perception in their head, it’s difficult to shake that. But when you come and actually try it for yourself, you realise it’s not actually like that at all.”

“The standard is getting better year by year. From playing in the league, there’s a lot of good South American players here, which people probably don’t realise or have never heard of back in the UK.”

“Sometimes you can get stale playing in the one place. You play within yourself and you’re playing at the same level or the same pace for a while. This was a new challenge and one which I couldn’t really turn down.”

Unlike his compatriot, Gallagher’s route to Atlanta was more circuitous. The son of a Guinness executive, the Dundalk native had a peripatetic childhood, living in Jamaica, Singapore, the US and wherever else his father’s job took him. As a teenager, he attended boarding school in the UK and landed trials with the likes of Juventus, Marseille, Newcastle United, and Blackburn Rovers.

Offers from those clubs weren’t forthcoming, but he didn’t want to give up on his hopes of a professional career. His father suggested attending college in the US, the thinking being that he could study and continue to play soccer. The striker wound up committing to Notre Dame University and played with them for four years, scoring 39 goals and earning numerous accolades.

It may have been an unconventional route for an Irish player, but it paid off when Gallagher was selected 14th overall in the MLS Superdraft by Atlanta United. For Gallagher, it was a good fit.

“Obviously Atlanta were brand new last year, the new kid on the block, and they were exciting to watch so I’d tune into as many games as I could on the telly. They played such an exciting, attractive style of soccer.”

“Honestly, I didn’t know where I was going to go in the draft because that’s just kind of how it is on the day. You just wait and see where you land. So I was very, very excited and very thankful for the opportunity they gave me.”

He made his professional debut in March with the club’s second team and has scored three goals. Making an appearance with the first team is on the to-do list, but he’s just happy to be playing football for now. “I’ve enjoyed it and the key is to just keep working hard,” he says.

Both McCann and Gallagher speak glowingly of the setup in Atlanta – the staff, the facilities, the professionalism. Being Irish, they can’t help but mention the nice weather.

But it’s the club’s devoted fanbase that stands out for both players.

“I’m a huge Manchester United fan and I was over Old Trafford in December,” says Gallagher. “And we had our first game here in the MLS and honestly the support and the noise level was basically the same. Atlanta might even top it because the fans are absolutely crazy and they don’t stop singing for the whole game.” (Atlanta fans are known for their take on “Thunderclap” popularised by Iceland, which sees them roar “A-T-L”.)

This Sunday, the Five Stripes, as they are known, will host league rivals New York City FC. It’s a tantalising fixture that will likely attract a sizeable crowd, an exhilarating prospect for players such as McCann.

“It’s amazing. The atmosphere, the way people have embraced it, to play in the stadium we play in every week – that’s what you play football for.”

1 Gerry Thornley: Wild reactions to this Ireland team as fickle as the wind
2 Mayo GAA cut contact with Tim O’Leary after ‘Horan Out’ tweet
3 Dan Tuohy explains ‘rotten to the core’ comments
4 Caelan Doris and Ronan Kelleher make strong case to start against Italy
5 Five Golf Classics for you to tee up at in 2020
Real news has value SUBSCRIBE
Crossword Get access to over 6,000 interactive crosswords