James McCarthy in line for first Everton appearance in 15 months 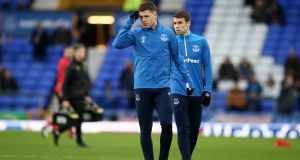 Republic of Ireland midfielder James McCarthy is in line to make his first appearance for Everton in 15 months after receiving a late call-up to the bench for Sunday’s Premier League game against Arsenal at Goodison Park.

In a late change to the Everton line-up, Phil Jagielka came in for fellow centre back Michael Keane, who was ruled out with illness. Jagielka went on to score the opening goal of the game after 10 minutes.

It meant a place on the bench for McCarthy, who has not played since suffering a double-fracture of a leg in January 2018 against West Brom.

Speaking on Saturday, Everton manager Marco Silva confirmed that McCarthy wanted a loan move away from the club at the end of January in order to get back playing football again and that the midfielder may well now look to leave on a permanent basis during the summer.

Silva says that the 28-year-old has been fully fit and available for selection for some time now after a year out due to a broken leg but that he simply has not been able to get back into the Premier League side’s first team.

In January, the club turned his request to leave on loan down because of what it considered to be its small squad size and the possibility that he would be needed as cover before the end of the campaign.

“James had one or two offers during the January market,” Silva is quoted in the Liverpool Echo as saying at his pre-match press conference ahead of the game against Arsenal. “But we decided, as a club, not to let him go because as you know we have 20 outfield players in our squad, two for every position.

“And so, when we decided to send Beni Baningime out on loan [to Wigan Athletic], we also decided to keep James. He is a player that stays in my mind, though. He is fit. Since he came back from his injury, apart from one or two issues but nothing to do with his injury, he is always training to his maximum and working hard, as you know James does.

Silva, though, has not given McCarthy any game time, something that has clearly impacted on his status at international level, with the midfielder behind the likes of Idrissa Gueye, Morgan Schneiderlin and Tom Davies in his club’s pecking order. And the manager accepts that McCarthy may be impatient to get back playing for next season, the last of his contract at Goodison.

“This is also true and possibly something that is in his mind,” said Silva. “I had a chat with him in January in the last days of the market and it was something in his mind. James expects to play more games before the end of the season and if I was in his position I would think in the same way but it is up to me to decide the best 11 for each match.