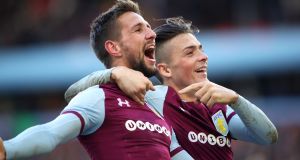 Aston Villa vaulted into the automatic promotion spots for the first time this season after a fabulously supported, fiercely contested but ultimately one-sided derby.

The match was decided by two second-half goals, the second of which was a moment of brilliant and rather unexpected individual quality from Conor Hourihane which will be remembered long after the remainder of an often unexceptional contest is forgotten.

It was all overseen by Steve Bruce, who had been given compassionate leave following the death of his father last week but returned to take his place in the dugout – or more accurately on the edge of his technical area, observing events with hands plunged deep into his coat pockets – in time for kick-off, where he witnessed an extended and profound absence of goalmouth activity.

For the first time in four games he changed his starting XI, though only slightly, with Mile Jedinak coming into midfield, making his first start since New Year’s Day in place of Birkir Bjarnason.

It was in midfield that the home side’s superiority was most marked, with Albert Adomah and Robert Snodgrass providing width, assisted by willingly overlapping full-backs, and Jack Grealish outstanding inside them. The Solihull-born 22-year-old was at the heart of the game’s finest moments, and it was his excellent pass in the 17th minute, collecting the ball just outside his own area from John Terry’s clearance and playing it high, long and into space for Scott Hogan to run on to, that led to the striker cutting inside and hitting a dipping 20-yard shot that clipped the top of the bar.

It was Grealish’s touch too in the 26th minute that set up Adomah, who checked on to his right foot and lashed a firm shot too close to David Stockdale.

The closest Birmingham came to curbing Grealish’s influence was in the 21st minute, when he fell after a tussle with Cheikh N’Doye and the Senegal international’s foot came down, without apparent malice, upon his ankle.

Birmingham, who remain just two points from the bottom three, offered little in attack but for a couple of bright runs from Jérémie Boga, whose jinking dribbles from the left wing were repeatedly curtailed by Jedinak’s well-timed tackles, but they had by some distance the outstanding chance of the opening period when Terry’s stumble in the 42nd minute allowed Sam Gallagher to race clear on to Jacques Maghoma’s pass. The striker sprinted into the area, paused to collect himself and then drilled a fine but slightly wayward low shot past Sam Johnstone and against the far post. It rebounded straight back to the on-loan Southampton striker but this time, unprepared, he poked over.

Terry was again involved when the ball hit the frame of the same goal a minute into the second half, but more deliberately this time as the defender’s header from Snodgrass’s cross flicked off Harlee Dean and brushed the bar before being cleared. Still Grealish was central to most of Villa’s best moves, and though N’Doye and Dean were both booked for fouling him he was to assist the opening goal.

The Blues had a warning in the 41st minute, when Grealish strayed to the left, allowing Adomah to move inside, and the former’s pass set up the latter for a 20-yard shot that zipped wide. With an hour played they repeated the move, and this time Adomah ran on to the ball on the edge of the area and passed it with admirable precision just inside the near post.

Villa’s second was less cleverly created but more memorably finished: Terry’s free-kick from inside his own half was headed out to Hourihane, who chested down and from 25 yards hit a dipping half-volley over Stockdale and into the net.

Birmingham’s efforts to work their way back into the game were fairly feeble, and though Marc Roberts headed Jota’s corner on to the top of the bar in stoppage time the match ended with a further blow for the visitors, N’Doye shown a second yellow card for unnecessarily initiating some penalty-area aggression in the closing seconds. – Guardian service