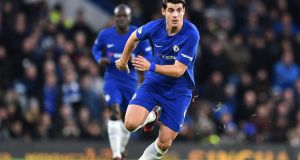 Antonio Conte has admitted serious concerns over when Álvaro Morata will be fit to return from a troublesome back injury and cast doubt over the Spaniard’s involvement in Chelsea’s Champions League ties against Barcelona.

The club record signing, who cost an initial €65m from Real Madrid last summer and has scored 10 goals in 20 Premier League appearances, first complained of discomfort more than three weeks ago and has not featured since being sent off in extra time in the FA Cup third-round replay against Norwich in mid-January. Chelsea’s medical staff continue to explore different ways to treat the pain but Morata has failed to respond to the treatment.

Conte is likely to give Olivier Giroud a first start since an €20m move from Arsenal in Monday’s game against West Bromwich Albion, when Chelsea hope to recover some poise after successive three-goal defeats by Bournemouth and Watford.

“We have been talking a lot about bad results but sometimes we forget we are facing a serious situation,” said the head coach. “Players like Morata, for us, are very important and have been missing for a long period of time. I don’t know how long he will be out.

“We are struggling a lot to find a solution to solve the pain in his back. If you ask me whether he needs a day, a month or the rest of the season, I don’t know. For this reason, I’m a bit worried. You know very well the importance of the player.”

Chelsea host Barça at Stamford Bridge on February 20th and are due to travel to Manchester City and Manchester United before the return at the Camp Nou in mid-March. They are effectively preparing for life without the 25-year-old in those fixtures.

Conte, who has overseen two wins in 10 matches this year, has reaffirmed his commitment to Chelsea as he seeks to inspire a revival, with the club just as reluctant to instigate a change in the dugout mid-season.

“I’m not thinking for one moment about the possibility of going away from this club,” he said. “I repeat: my commitment, like the commitment of my players, is totally for this club.

“But, as you know very well because we are talking about football, a lot of times – and I don’t agree with this – [the future of] the manager and the coach depends on the results. In this case, we are having poor results. For this reason, we have to pay great attention.”