As sales of sports annuals decline, this stat-packed 1,000-page tome is holding its own 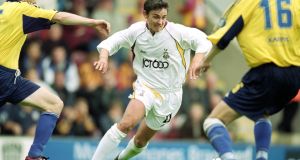 In the second round of the 2000/01 Intertoto Cup, Bradford City beat FK Atlantas of Lithuania 7-2 on aggregate, with Ireland’s Andy O’Brien playing centre half for the Bantams in front of a second-leg crowd of 10,012 at Valley Parade.

That may sound like some of the least interesting information you’ll hear all day/week/year, but it’s all neatly contained, along with every other possible stat and fact you could want, in the Rothmans Football Yearbook 2001-2002. Bradford went on to reach the semi-finals of the now-defunct European competition that year before being knocked out by Zenit Saint Petersburg, and their progress can be charted on page 747 of that season’s yearbook – once the bible for football fans and journalists everywhere but now seemingly on life support along with newspapers, CDs, books, DVDs and essentially everything that isn’t online.

Or is it? Last Thursday the Football Yearbook published its 50th edition for the 2019/20 season and, for the moment, there are no plans to wind down operations despite the continuing decline in sales and the high costs of producing a book that is now well over 1,000 pages in length. John Motson once described the book as “the internet between two covers” and it’s easy to see why, as every year the huge tome carries more and more information.

Want to know every stat from each of Manchester United’s matches last season? That’s easy. You can check the pitch dimensions of Old Trafford while you’re at it as well. A list of every player who has ever played for the Republic of Ireland, the opponent and date of each match? That’s all contained over five pages towards the back of the book.

Since it was first published in 1970 the Football Yearbook has stood the test of time where numerous others have fallen by the wayside in the ever-decreasing world of sports annuals. The pocket-sized Playfair Football Annual ceased publication after the 2012/13 season while the Rothmans Rugby Union Yearbook bit the dust as far back as 2000, two years after its Rugby League counterpart had also died a death. The Wisden Cricketers’ Almanack is perhaps the greatest example of a sporting annual that is still thriving since it was first published in 1864 and has been produced every year since, making it the longest-running sports annual in history.

However, where Wisden has expanded into its own website, a monthly magazine and a podcast, the Football Yearbook has stayed staunchly the same for 50 years providing nothing more or less than a reference point for fans, reporters, commentators and whoever else wants it. But that habit of picking up a book, checking the index page and finding the relevant statistic has long been replaced by simply typing the query into Google and picking one of the abundant number of stats websites that are out there. With the ease of an internet search, why would anyone pay for a book when all of the information anyone could ever want is available for free?

In 1971, when the second edition of the Yearbook was published, there was no doubt among those involved that such a reference book was badly needed.

“It was our belief that there was an urgent need for a reference book on the subject of soccer to answer the arguments which always arise when lovers of Association Football gather together,” reads the foreword of the 1971-1972 edition. Fifty years later it makes for interesting reading, and it’s certainly difficult to envisage anyone pulling out a book which weighs just over one kilogram to settle a debate in the pub.

Jonathan Taylor publishes the Football Yearbook for Headline Publishing Group and he says that the decline in the sports annual market has been noticeable for years.

“I think it would be absolutely fair to say that the sales of sports reference books has declined in direct correlation with the availability of statistics online,” he says. “When I first got into publishing in the early ’90s – around 1990 – there were a whole plethora of sports reference books across a number of sports. A lot of them sold extremely well and they were a big part of the sports fan’s experience. Many of them heralded the start of particular sporting seasons like the Wisden Cricketing Almanack still does, and I publish the Playfair Cricket Annual, too, and that sells quite well.

“But there aren’t that many of these books around anymore. I’ve published a fair few of them over the years and for purely commercial reasons publishers have found themselves having to stop publishing them. Incrementally the sales have fallen over a period of at least 20 years, I’d think. The market has diminished completely predictably, especially when you think of how much information can be obtained online. The handful of yearbooks that remain have built up such a strong brand and have got such a place in people’s hearts – particularly of a certain vintage – that they continue to sell sufficient copies to make them commercially viable for the publishers either through sponsorship deals or just that they continue to make sufficient revenue.

“We produce the yearbook in two editions. The main edition is a paperback format and it wouldn’t be inaccurate to say that we print and sell in the region of about 10,000 copies. The hardback is much smaller and very much a secondary edition but it does have a following amongst the real enthusiasts and the real collectors, but sales of that are more like in the hundreds. It’s fair to say that at its peak it would have sold multiple times what it sells now.”

Indeed, two years ago it looked like time might be up for the Football Yearbook, two editions short of its half century, when Sky Sports withdrew their sponsorship – which at the time was reported to cost in the region of £30,000 (€32,500) per year. The television company had initially stepped in to sponsor the book for the 2003-2004 edition after cigarette company Rothmans had to pull out due to new restrictions around tobacco advertising in the UK.

After Sky stepped back, the future looked bleak for the yearbook, with the end seemingly inevitable. However, the Sun newspaper then stepped in to carry on the tradition and it remains the sponsor for the current 50th edition.

Much of the content of the book is supplied by news agencies, but the workload of formatting and putting the book together remains a daily task at the busiest times of the year, says editor John Anderson. He took over for the 2013-2014 edition after the previous editorial team of father and daughter Jack and Glenda Rollin left.

“The main content of the book is supplied by the Press Association and it’s compiled as we go,” he says. “It’s basically a mixture between researching and receiving data from PA. The thing just grows and grows because each year you have new lines for the various cups and in the international section you might have another 20 or 30 players go in as debutants. If there are new competitions like the Nations League last year we have to accommodate that.

“Inevitably, there’s been a steady decline but the yearbook has survived. You can get any information you want on the internet but the book still stands the test. People still want to put a book on the bookshelf. Without a sponsor I don’t think it would survive.”

Look at the reference books that don’t exist anymore. A number of them have bitten the dust over the last few years

And so, what of the future? Like much of the media industry, including newspapers such as the one you’re reading this in, the future is uncertain. The high costs associated with compiling and producing thousands of a copies of a book which runs well over 1,000 pages are considerable, and the return on those costs is lessening and lessening as fewer people spend their money on information which can be obtained for free on the internet. The Football Yearbook won’t continue to publish forever and no one is under any illusions that it will; but, for now, Taylor is hopeful that the band of loyal readers will continue to make its production worthwhile.

“Younger people have different ways of getting information and they probably aren’t in the same habit of, say, football fans in their 50s, 60s and 70s who form the core of the readership for the Football Yearbook,” he says. “It’s hard to know how many more years these books can continue to exist for, but we certainly have no plans to run down the Football Yearbook. We’ll continue to publish it as long as there’s a sufficiently sizeable audience who want to buy it.

“But you only have to look at the reference books that don’t exist anymore. A number of them have bitten the dust over the last few years. How many will still be on the market in 10 years? I wouldn’t like to guess but I think the trend is clear.”