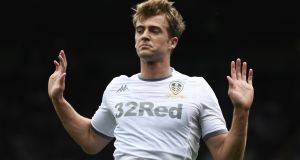 Patrick Bamford’s double sent Leeds to the top of the Championship after a bad-tempered 2-0 win at 10-man Wigan at the DW Stadium.

Wigan had Joe Williams sent off in the 21st minute for a second bookable offence before Bamford struck his first after Adam Forshaw’s header had hit the post.

Bamford made sure of victory when he scrambled the ball home from a corner in the 65th minute, while Leeds goalkeeper Kiko Casilla saved brilliantly to deny Lee Evans.

Sheffield Wednesday’s promising start came to an abrupt end as they were beaten 1-0 by 10-man Millwall at the New Den.

Matt Smith put the Lions in front in the 37th minute and despite Jed Wallace’s dismissal six minute later for a high tackle, Wednesday could not find a way through.

Lee Bowyer’s Charlton also lost their perfect start but they grabbed a dramatic late point in a 2-2 draw at Barnsley.

Cauley Woodrow’s 34th-minute opener was cancelled out by Conor Gallagher before the break, but Conor Chaplin looked to have won it for the Tykes until Lyle Taylor equalised with an 89th-minute penalty.

Grady Diangana’s double saw West Brom come from behind to win 2-1 at Luton, who had gone ahead through Harry Cornick’s early header.

Former Middlesbrough striker Danny Graham sunk his former club as Blackburn claimed their first points of the season with a 1-0 win at Ewood Park.

Borja Baston scored twice as Swansea won a thriller 3-2 against Preston at the Liberty Stadium.

Baston cancelled out Joseph Rafferty’s early strike before George Byers put the Swans in front for the first time in the 63rd minute.

Daniel Johnson equalised four minutes later from the penalty spot but Baston earned the points with his 69th minute header from a Jake Bidwell cross.

Stoke claimed their first point of the season in a 2-2 draw with Derby, for whom Martyn Waghorn scored twice with the Potters’ efforts coming from Liam Lindsey and Ireland striker Scott Hogan.

Hull were pegged back at Brentford, with Jarrod Bowen’s 53rd-minute opener cancelled out by an equaliser from Ollie Watkins in the 72nd.