Liverpool warm up for Rome with Stoke City stalemate 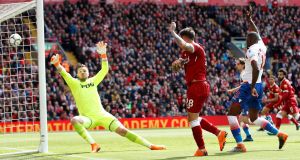 Premier League leading scorer Mohamed Salah had a rare off day as Liverpool continue to stumble towards guaranteeing a top-four finish after a goalless draw at home to Stoke.

However, it was even more damaging for struggling Stoke, whose point failed to see them escape the bottom three. With all their relegation rivals having games in hand, their top-flight future looks bleak.

Ahead of the game a Dunboyne GAA jersey was hung in the home dressing room, in tribute to Seán Cox who remains in a critical condition in hospital.

Jurgen Klopp’s side still require a maximum of four points from their last two matches — including next week’s crucial trip to Chelsea — but equally worrying were injury scares for Jordan Henderson and Salah ahead of Wednesday’s Champions League semi-final second leg which they lead 5-2.

That impending date with destiny, and the early kick-off, did little to enliven a game which could have been so different had 43-goal Salah been his usual prolific self after just six minutes.

The jersey of St Peter's GAA, Dunboyne hangs in the Anfield dressing room in support of Sean Cox. pic.twitter.com/mFtlQpNX5Y

When the Egypt international broke clear on his own and dinked the ball over goalkeeper Jack Butland, most of Anfield started to celebrate. So there was a feeling of disbelief when the ball went wide.

It set the tone for Salah, brilliant in midweek with two goals and two assists against Roma, to have one of his poorest performances in a red shirt. It was the first time since Boxing Day he had started a match at Anfield and did not score.

Credit should be given to Stoke left-back Erik Pieters, who barely left Salah’s side for the entire 90 minutes and did an effective job of shackling the Professional Footballers’ Association Player of the Year.

The sight of the Egyptian limping slightly in the latter stages, after Henderson had received treatment earlier after being caught on the ankle by Xherdan Shaqiri, will have done little to help Klopp’s mood — having watched his side squander a 2-0 lead against West Brom a week ago.

Aside from Mame Diouf heading into the side-netting and Peter Crouch just failing to connect with Shaqiri’s low cross into the six-yard box, they gave a poor impersonation of a team supposedly fighting for their future until Ryan Shawcross stabbed wide at the far post with two minutes remaining.

With that seemingly went their chances of escaping relegation.

Liverpool fell a long way below their usual standards, however, with next week’s semi-final and five changes — including playing 19-year-old full-back Trent Alexander-Arnold in midfield because of a growing injury crisis — no doubt having an effect.

Alexander-Arnold forced one save from Stoke’s England goalkeeper Jack Butland midway through the first half, Georginio Wijnaldum and Salah both found the side-netting and Danny Ings had a goal ruled out for offside but one shot on target in the opening 45 minutes was Liverpool’s worst first-half return at Anfield since Leicester on December 30th.

The Reds, who had a late penalty shout when Wijnaldum’s cross hit Pieters’ arm, continue to leave the door open for fifth-placed Chelsea and next week’s encounter at Stamford Bridge will be pivotal. However, before that they have a tricky second leg in Rome to negotiate.

However, the trapdoor is closing on Stoke, who have not won at Anfield in 55 top-flight matches.