Rommy Boco and a footballing life from Benin to Sligo, to China 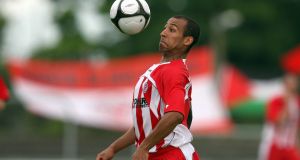 It is difficult to imagine, as Rommy Boco sits in what the manager John Coleman ironically calls “the posh room” at Accrington Stanley’s Wham Stadium, but the midfielder once led where Oscar, Hulk and André Villas-Boas have followed and took the money at Shanghai SIPG. Made for life after football? Not quite. Prepared for it? Certainly, thanks to a bakery in Chesterfield, not a pay cheque from China.

Shanghai was six years ago for Boco, one stop in a career that is the definition of well-travelled and rolls on to the Riverside on Saturday when Accrington face Middlesbrough in the FA Cup. Now in his third spell with the League Two club, the 31-year-old has played in India, had three spells with Sligo Rovers – partly explaining an accent that is a hybrid of French, Irish and scouse – and signed for Chamois Niortais, Burton Albion, Plymouth Argyle, Chesterfield, Portsmouth and Havant and Waterlooville. There have also been 48 international appearances and three Africa Cup of Nations campaigns with Benin.

“I’ve played many important games before and this is up there,” the midfielder says of the fourth-round tie. “As the small team we know we will have the support of the whole country. If we lose no one will say anything. If we win then we can make all the headlines. We will have more confidence against Middlesbrough than we did against Luton [in the third round] because we know nobody will say anything if we fail. If we had failed against Luton you would have regrets, thinking you should have won against a team from our league. All the positives are with us now.”

Boco’s preparations have been far from ideal. He missed several days’ training this week to return to France for a scheduled operation on his teeth, the lasting consequence of a blow suffered in May’s play-off semi-final defeat by AFC Wimbledon. Four front teeth have required root canal treatment, an implant this week secured others in place and he will need a brace for the next year or two. Boco’s weight and outlook have been affected.

“It was the worst moment of my career,” he says. “I worried all the time, worried about playing, because another knock and that’s it, I will stop my career. I got hit in the mouth but a bit higher up and it could have been very dangerous. I used to see danger but I’m not as sharp to judge it now. It’s hard to accept.”

Coupled with concern over Stanley’s league status – Coleman’s side are only three points clear of the relegation zone – Boco’s predicament is not one China’s current crop of imports are likely to endure.

Shanghai SIPG were Shanghai East Asia when he moved from Sligo in 2011. Chinese football was not awash with the wealth of today but, as now, those who travelled east were accused of pursuing money over ambition. Boco does not disagree, though he takes issue with the criticism.

“It’s easy to criticise people for going but maybe if you were in their position you’d think twice” he says. “Oscar is one of the best players in the world at his age but he’s already won a lot of trophies and we don’t know how he spends his money. You hear of a lot of big players being declared bankrupt two years after they finish playing. Maybe they go to China to clear off some debts? We don’t know. Each case is different.

“For me, at the stage of my career when I went, it was a good opportunity. I’m not a Premier League player, I’m not going to make that money here, so I couldn’t turn it down. The people who criticised me for going, I told them we could talk about it at the end of my career. I have to work in my life. I tried to save to help my future. A Premier League player will see things differently. They’ll be flying British Airways and I’m on easyJet. We don’t live in the same world. Maybe because of the way they live their lives they need more money than I do, so I don’t blame anyone who goes to China. If they go and get good money, good for them.”

Boco stayed one season in Shanghai and cites culture shock as the reason many players from European clubs have only fleeting careers in China. “It was three training sessions a day, every day. We would get up at 8am and have the first morning session, have breakfast and then back to your room. Then we would have 10am training until 12, eat, and at 2.30pm we would start training again. That was Monday to Thursday. There was one training session on the Friday, a game Saturday and training again on Sunday afternoon. It was like that all season. We didn’t have a day off for nine months. That’s what it is like in China – push, push, push.

“When I went there everyone in the team had to live together at the training camp, even those with families. They might give you a flat but you’re at the training camp from 7am to 7pm anyway. And you room together, travel together – it is not that easy. Even if they take a foreign manager they would have a Chinese coach beside them and the Chinese mentality is to train this way always. They won’t change and it was so hard. The food as well. But you adapt. If you’re getting paid millions to go you’d eat lizards, crocodiles and elephants!”

Boco believes China’s investment in football will not stop until they host a World Cup – “As soon as I arrived in Shanghai the chairman told me football was going to be politics and China wanted to show the world they are one of the strongest countries,” he recalls. “He always used to say: ‘We need the World Cup.’” India, he envisages, “will be the same as China in the next 10-15 years”. But the most formative experience of Boco’s varied career came two seasons ago when, after his contract expired at Plymouth, he ventured out of the football industry for the first time to augment his income.

“I was on non-contract terms with Chesterfield and I had to work in a bakery,” says Boco, who could not speak English when he first arrived at Accrington from France 12 years ago. “I applied for 150 jobs. Only one answered and they said: ‘You’re not our profile, you’re a footballer. Why would you accept £6.50 an hour?’ I told them I wouldn’t ask to work for £6.50 an hour if I didn’t need it. They still wouldn’t give me the job.

“But I was lucky and got a job in a bakery. I did night shifts, 10pm to 6am, and trained after. In my football career it’s probably the best experience. Not to have played in China, but to have worked in a factory because it made me realise how lucky you are to be a footballer. If the young ones had that experience they’d work much harder in training and think more about saving money. Instead they get good cars and don’t realise after football there is nothing. We’ve got the best job in the world and if you don’t take it seriously you’ve only got yourself to blame.”