Brentford holding out for £15 million for Scott Hogan 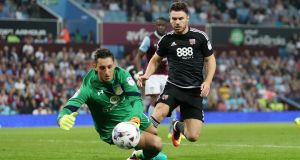 Hogan, who has yet to decide on his international future despite interest from Republic of Ireland manager Martin O’Neill, has been omitted in recent weeks following speculation of a move to West Ham, who have so far fallen short of Brentford’s valuation, which is understood to be £15million.

And the 24-year-old could miss Saturday’s FA Cup fourth-round tie at Premier League leaders Chelsea due to the lack of game time resulting from the uncertainty surrounding his future.

“We would let any of our players go anywhere for the right money, because everybody has a value at any club,” Smith said. “We’ve had offers from different clubs for Scott Hogan and all of them have not met the valuation.

“We keep our business strictly private. We’ll say no to people if we don’t think the value is met and then it’s up to them to come up with a deal that does meet ours.”

Hogan was withdrawn from the Bees squad for last weekend’s loss at Wigan after suggestions a renewed bid was imminent.

“Scott’s available for selection. He’s trained all week, again, as he did last week,” added Smith, who has a full squad to select from. “It will be my decision whether he’s starting, whether he’s on the bench or whether he’s not involved.

“I think we made that abundantly clear last week at the end of the game that we’re not going to be affected by phone calls.”

Smith made a veiled criticism of Hogan’s agent when asked about the transfer window, adding: “There’s just so many influences now and influencing team selections that shouldn’t be. It’s not just our club, but all clubs.”