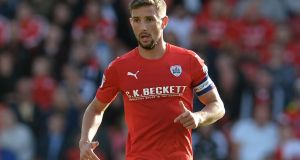 Conor Hourihane has completed his move to Aston Villa where he links up again with Steve Bruce, the manager at Sunderland when the Corkman was a teenager coming through the youth ranks at the club.

Villa are believed to have paid around €3.5 million for the 25 year-old (he turns 26 next week) who would have been out of contract at Barnsley in the summer. The Oakwell club issued a statement on Thursday confirming that he had been sold reluctantly but wishing the player well.

Hourihane, who left Sunderland then Ipswich without playing a first team game had kick-started his career at Plymouth after signing five years ago before really showing his potential at Barnsley where he scored 31 goals in 130 games from midfield.

He became captain of the club and played a key role in their promotion last season from League One but it is the ease with which he has stepped up to Championship level that must have caught Bruce’s eye with the Irishman having scored six times this season and created more goals for team mates than any other central midfielder in the division by quite some distance.

At Villa he will link up with a leading member of the chasing pack, Henri Lansbury, who arrived last week from Nottingham Forest and the pair are seen as having the potential help the club improve on its rather dismal goalscoring record so far this season and, it is hoped, play them back into contention for the play-offs (they currently lie nine points of sixth place) but the new signings could be bad news for former Ireland youth international Jack Grealish.

Hourihane, meanwhile, will be hoping to use Villa as a springboard to the senior Ireland set up. He was previously capped at Under-19 and under-21 levels and has been included by O’Neill in a provisional squad for a couple of World Cup qualifiers but the Corkman will be aiming to show that his ability at dead balls and his ability to score from distance or set up goals for those around him would make him a contender for the team itself.

“I’m really pleased to be here,” after signing today. “Aston Villa are a massive club and I’m looking forward to a new chapter in my career and developing further as a player under Steve Bruce.”