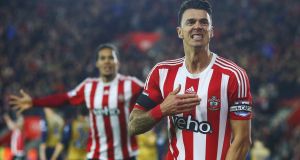 You have to wonder how Jose Fonte felt. As Southampton made their way to Wembley by outstaying Liverpool at Anfield on Wednesday night, Fonte was at West Ham thinking of a very different London stadium.

Then again, the money in east London is good and, anyway, Fonte has been to Wembley with Southampton already: remember the Johnstone’s Paint final of March 2010? Carlisle United 1 Southampton 4? There were 73,000 there. Fonte was one of them. Seems a long time ago.

But it matters to Fonte, who mentioned that day in his farewell letter to Southampton supporters.

Even so, on Wednesday night Fonte may well have found it strange as his former colleagues made it to the League Cup final. This was not the Southampton he joined.

Suddenly a Hammer preparing to meet Manchester City in the Premier League on his debut, Fonte had been at St Mary’s since this month seven years ago. Then the Saints were in League One. Then the opposition on his debut were Millwall. His manager was Alan Pardew. It’s not Anfield 2017.

Fonte has been as essential part of Southampton’s climb. There have been two promotions and in the last three – Premier League – seasons, he has missed only four games.

This season he has been in Southampton’s colours 19 times already, even if there has been an awareness that if Fonte could go, he would go.

At 33, his agent thought his client was due a pay-day. The client did not disagree. “We all know how the football business works,” Fonte said in that open letter.

Money or memories? Money or experiences? We all know how the football business works.

That opinion could be called nihilistic, or it could be called realistic. We are forced to accept the pragmatism, though it is cold and shifts uncomfortably within us. The wrong Fonte.

Yet if you throw history at him, Fonte can say that he is part of Southampton’s modern story of administration to achievement. He was at Millwall.

Mention silverware to him and Fonte can retort, not just “Johnstone’s Paint”, but also that he won a rather more impressive trophy last summer with Portugal, the European Championships in France.

Now it’s about earning, as the golfers say. Fonte has received an amount of criticism from Southampton fans but before he is overly castigated, it must be said that many colleagues in a similar situation, at a similar stage in their career, would do the same.

Fonte had become sufficiently significant at Southampton for the club to replace him with two men. Virgil van Dijk has been made team captain; Steven Davis has been made club captain. That’s a compliment. It is also a reminder that each of these men know how it works.

Like Fonte, Van Dijk has also had a blossoming past year and but for an ankle injury – which meant he missed Anfield – Van Dijk would surely be the subject of bids larger than that which moved Fonte. The Dutchman, too, could be penning a letter.

As on Wednesday, that would leave Davis with the armband. Here is another Southampton player for whom the past 12 months have been prosperous.

Davis played with vivacity and discipline throughout qualification, setting an example his team-mates followed. Meeting Wales in Paris in the quarter-finals, match previews focussed on Gareth Bale and Aaron Ramsey. It was then that Kyle Lafferty pointed out the sustained excellence of Davis. Sure enough, Davis was Man of the Match, even in defeat.

Davis signed a new three-year contract at St Mary’s on his return from the Euros, but he was 32 at the start of this month and if West Ham made a bid that enticed his agent, would Davis be persuaded to stay or to go? When Rangers were imploding in 2012, Davis left Ibrox. It’s how the football business works.

If Van Dijk’s injury is as bad as feared, the prospect of leading out Southampton at Wembley lies in front of Davis. That should be enough. Or so we think. Jose Fonte proves otherwise.

A Northern Ireland predecessor of Davis’s famously said that the game is about glory, but deep down even Danny Blanchflower knew about age and money.

Elsewhere in England’s north-west in midweek, the news was historic. In the 82nd minute of Oldham Athletic’s League One game against Peterborough United on Tuesday night, Ryan McLaughlin scored Oldham’s second goal to ensure a 2-0 victory.

It was McLaughlin’s first goal for his new club, having been released by Liverpool last summer. It came after Paul Green got the first in front of over 7,000 fans at Boundary Park.

Oldham had granted free entry to all and apparently the atmosphere generated was old-time. John Sheridan, newly reinstalled at Oldham, will not have been cursing that decision. His team are still relegation material, though.

Meanwhile, across in Yorkshire, Ryan’s older brother Conor, 25, was opening the scoring for Lancashire’s Fleetwood Town at Sheffield United. This was at the top end of the same division and was Conor’s fifth goal of the season – he’s a full-back.

As the Irish Football Association pointed out, this was the first time Northern Ireland international brothers had scored on the same day since the Blanchflowers – Danny and Jackie – in 1954.

Those goals were for Aston Villa and Manchester United in the top flight. Still, the McLaughlin brothers are blooming. They deserved any glass raised to them in west Belfast on Tuesday.

BLACKPOOL’S NEIGHBOURS ON THE RISE

Fleetwood Town’s rise is one of the unforeseen tales of the past ten years. Not far from Blackpool, and in its football shadow, the club was small, amateur and in the Unibond Premier Division nine years ago. By next season Fleetwood could be in the Championship.

The ambition is infectious it seems. Also in the shadow of Blackpool, AFC Fylde are a coming club. Top of the Conference North, promotion looks certain. That would leave them one promotion away from the Football League.

Previously small and amateur, Fylde are growing and professional. Successful businessmen are behind both Fleetwood and Fylde. This is one of the contrasts with sinking Blackpool.