Wembley-bound Southampton leave Klopp in need of a response

Liverpool have floundered in January as promising season threatens to unravel 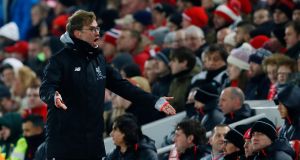 Jürgen Klopp and Liverpool have endured a torrid start to the year. Photograph: Reuters/Jason Cairnduff

There was no disguising the EFL Cup mattered to Jürgen Klopp or that the momentum and cutting edge that propelled Liverpool until new year has vanished at a critical juncture. Wembley also disappeared from view on a painful night for Klopp’s team as Southampton executed their game-plan to perfection at Anfield. A job well done by Claude Puel, and a job done on Liverpool.

Since victory at Burton Albion in the opening round, the Liverpool manager had made no secret of his ambition to reach the final and to go one better than last season’s penalty shoot-out defeat against Manchester City. Those hopes were ruined by wasteful finishing, a lack of invention and another resolute display from Puel’s side. Klopp insisted there was nothing wrong with his team’s creativity in the semi-final, that only their finishing was amiss. However, Jack Stephens and Maya Yoshida were composure personified at the heart of the Southampton defence, and the merits of their victory over two legs was unquestioned.

For Liverpool, a semi-final exit hard on the heels of falling 10 points behind Chelsea in the race for the Premier League title has extinguished optimism at Anfield. They can ill-afford deflation to take root when Wolverhampton Wanderers arrive in the FA Cup on Saturday followed by Antonio Conte’s pacesetters next Tuesday.

Klopp broke from his usual post-match routine after the defeat by Swansea City – Liverpool’s first at home in the league for over a year – to convene a team meeting the following day at Melwood instead of an immediate debrief in the dressing room. His message was that players should “enjoy this, even when we don’t come through after five minutes.” That problem was evident on Saturday when, despite legitimate focus on absent players and fatigue, Liverpool appeared to expect rather than force victory against the relegation-threatened visitors. They could not be faulted on that score against Southampton but once again the vibrancy of recent months was missing.

The Liverpool manager’s actions, and team selection for the second leg, underlined the significance of four consecutive home games to his ambitions for the season and the need for an immediate reaction having fallen at the first. There was huge encouragement for the hosts before kick off when it was confirmed Southampton centre-half Virgil van Dijk was absent due to an ankle injury. The Holland international had been imperious in the first meeting and his absence – possibly for the long term – piled responsibility onto Stephens in the heart of the visiting defence. Anfield represented the England under-21 international’s sixth appearance for his boyhood club but his inexperience was rarely examined in a flat first half. He thrived when tested after the interval, so too Yoshida, while Steven Davis and Oriol Romeu excelled in central midfield.

As against Swansea, a deep-lying defence and Liverpool’s struggle to find a way through stretched the patience of the Anfield crowd. It was stretched a little too far by Daniel Sturridge’s carelessness in possession judging by the groans that greeted his slips and misses. Sturridge was handed the central striking role as Klopp shifted Adam Lallana back into midfield against his former club and deployed his two Brazilians, Roberto Firmino and Philippe Coutinho, to the right and left respectively.

Coutinho, fresh from signing a new five-year contract that significantly contains no release clause, dropped deeper and deeper in search of space to pick out a telling pass. Firmino snapped a shot from distance straight at Fraser Forster but yet again his effectiveness was reduced by moving out wide to accommodate a striker. It happened when Divock Origi was brought back into the side and again with Sturridge. The fluency of Liverpool’s attacking play has diminished since injury and the Africa Cup of Nations disrupted the forward line of Coutinho, Firmino and Sadio Mané, their balance lost. Mané’s pace and intelligence on the ball has been sorely missed since he departed for international duty in Gabon.

The clearer chances fell to Southampton in the first half and Puel once again had every right to bemoan his side’s finishing. A more clinical touch would have seen his team through to the club’s first final since 2003 with 45 minutes remaining. Once again, the ease with which Liverpool’s opponents opened up their defence would have disturbed Klopp, who had highlighted the cheap goals conceded in Sunday’s team meeting.

Nathaniel Clyne’s abdominal injury gave Trent Alexander-Arnold another run-out at right back and the youngster was often stretched by Nathan Redmond’s speed. Three times in the first half Redmond broke clear down Southampton’s left and three times the visitors went close to extending their aggregate lead.

In fairness to Liverpool they never resembled a team that accepted defeat and pressed Southampton relentlessly in the second half. But for a remarkable recovery from Forster, who atoned for spilling Emre Can’s shot towards his own goal with an outstanding save on the line, and two close-range misses from Sturridge, Liverpool would have levelled on aggregate before Josh Sims broke superbly to set up Shane Long’s stoppage-time winner. Klopp wrote it off as one of those nights. The onus is on him to ensure it does not become one of those seasons.