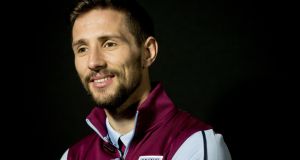 Conor Hourihane seems confident of making an impact at Aston Villa after finally completing his move there from Barnsley on Thursday. The Irish midfielder signed a three-and-a-half year deal after the two clubs agreed a fee believed to be in the region of €3.5 million and the 25-year-old is clearly anxious now to ensure he provides value for money.

“I want to continue the way I have been playing at Barnsley,” said the Corkman who has scored six goals this season and leads the Championship for assists from central midfield. “My confidence is high. Long may that continue. I work hard day in and day out and hopefully my form continues.

“Villa fans can expect an all-round midfielder. I like to stop attacks and also start attacks. I like to get in the box and score goals. I like to chip in with goals and assists. Hopefully that will continue – there’s no reason why not. I just can’t wait to embrace playing at Aston Villa and hit the ground running.”

Paul McGrath was one of those to congratulate him on the move and he was clearly happy to have made it. “I am over the moon to be here. Aston Villa is one of the very biggest clubs in England. With the size of the club and where it wants to go, it was a no-brainer for me to come here.”

Shane Long was a happy man too in the wake of scoring the League Cup semi-final winner at Anfield on Wednesday night. “To dig in like we did and keep them quiet and obviously get the winner in front of our own fans was an amazing feeling,” he said.

On our way to Wembley

“We broke and I think I was at the edge of the six-yard box and tried to get forward and help out Simsy [Josh Sims] and I think he saw me early. He did a great thing when he turned inside and committed Jordan Henderson to the ball and I managed to take a touch and slot it past the keeper. We knew that was that and we’re on our way to Wembley.”

The Irish Under-21s have been handed a tough draw in the qualifiers for the 2019 European Championships in Italy. Ireland has never made it to the finals at this age level and this time around they will face Germany, Norway, Israel, Azerbaijan and Kosovo who will make their international debut in the competition when they visit Ireland in March.

“We feel we can be competitive in this group,” said manager Noel King. “I feel there are teams we can beat in this group and I include Germany in that – on the right day obviously.

“We’ve an opening game against Kosovo and that’ll be their first ever under-21 game so it’s going to be tough. It’s a new campaign – everybody has to be up for it. We’ve retained a lot of players from the last campaign, six or seven of them have that experience which is a new one, and we’ve got to be positive going into a campaign.”