Liverpool are clearly now in the race with City, and Spurs have a run of gettable points 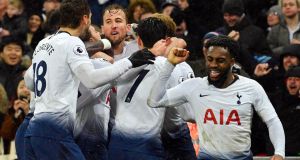 There was something telling about the roar around Anfield at the end of Sunday’s expertly enacted strangulation of Manchester United. As the referee blew his whistle, the players caught their breath or wandered across to shake hands. The noise from the stands was warm and sustained – but also unintentionally damning.

Liverpool had just played Manchester United off the park, all the way down Anfield Road, past Knotty Ash and back on to the M62. But this wasn’t a moment of triumphalism, or of glorying in the moment. It was applause with half an eye on something else, already looking towards the door, pleasure in another staging point ticked off.

Nothing chills quite like indifference, and this was the real lesson of the weekend. Beating this Manchester United, while clearly fun and pointed and storied with historic grudge material, is simply a means to an end for Jürgen Klopp’s team.

Which is good news for the rest of us. With the festive fixture glut approaching, we can now say it for certain. Welcome, Premier League watchers, to an actual, real-life title race.

Yes: we’ve finally got there, five years on from the last one. The league has, of course, produced wonderful teams in that time, and at least one startling story. But an actual, down-to-the-wire, adrenaline-powered title race has been lacking. And the product cannot be seen to be lacking, to appear a little oversold or reliant on noise and subplots and star names.

If this seems overly hopeful given there are still 21 league games to play, then consider where the league has been at the same stage in recent years. Last season Manchester City were 11 points clear of second-placed Manchester United with 17 games gone. The year before that Chelsea were six points clear of Liverpool. Three seasons ago Leicester City were only two points clear, but then struck out in January and cruised clear for the final 15 games.

Whereas this time around the season has finally thrown up two teams hitting their stride at the same moment, both with points tallies that would have them out on their own in almost any other year. Even Spurs, third on 39 points, would have been top at this stage the year Leicester won the league and top the season before, too, the year of we-don’t-let-this-slip and all that.

Where to from here? For Tottenham a serious run at the top will require a sustained winning streak and a stumble from both of the hares. Unlikely perhaps. But there is hope. After the trip to Everton next weekend, Mauricio Pochettino’s men have a run of nine winnable games before Chelsea and Arsenal loom into view.

Teams such as Wolves, Watford, Bournemouth and Manchester United are not to be underestimated. But the fact is there are 27 quite gettable points available in that period though to spring. During that time Liverpool face a tougher run, with trips to the Etihad, Old Trafford and Goodison. City’s run to the start of March is also a little harder, with Liverpool, Arsenal and Chelsea at home.

At the end of which, viewing through the most flattering neutral’s filter, it is possible we could have something close to a three-way jam leading into the final third of the league season.

Distractions look evenly spread out. All three chasing clubs are in the Champions League last 16. The shifting of the Africa Cup of Nations to June has removed another point of friction.

City have more to benefit from in terms of players returning from injury, with the best midfielder in the country, Kevin De Bruyne, only now brushing off the cobwebs. Spurs have the thinnest squad of the three and will be vulnerable to the ravages of the season. On Sunday afternoon, Liverpool could afford to save Xherdan Shaqiri for the final 20 minutes, the perfect change of texture as the game became ever more clogged in tight spaces, ideal for the fine-point explosive skills of Anfield’s own Power Cube.

But it is Liverpool’s defensive muscle that really marks out their title challenge, not to mention a point of agreeable contrast between the league’s top two. Virgil van Dijk is clearly the best one-on-one defender in the league, a footballer so calm at times you can feel both teams taking directions from him, the game’s designated head prefect.

Klopp will also take defensive comfort from the immense performance at Anfield of Fabinho, who covered brilliantly but was also able to provide that delicate lofted pass for the opening goal, the kind of pass the reminds you, even when the word has lost its lustre, that even a grizzled Brazilian midfield shield is still a Brazilian.

That resilience and defensive physicality are a slight departure from last season. But it is also a counterpoint to City’s more chancy, feather-footed movements, football that seems almost pigheadedly light and airy, a style that is relentlessly luminous on a point of dogged principle.

It is a contrast that will present itself in the flesh 2½ weeks from now when the champions entertain the current league leaders. If the cheers at Anfield on Sunday sounded standard-issue, ungripped by any obvious hysteria, it seems certain both sides will see the Etihad on January 3rd as a far more urgent date.

There have already been signs of a little interesting evolution towards that date. It will, for example, be fascinating to see how City respond to Liverpool’s fondness for rapid diagonal transitions down both flanks, the same kind of move that saw Chelsea expose the City full-backs’ vertiginous wanderlust at Stamford Bridge. For now we can simply be happy with that rare thing , an actual, real-life title race; something that even in the most violently stratified league looks like old-fashioned robust sporting competition. – Guardian

Salah seals the deal as Liverpool see off a dogged Man United 18:39
Connacht huff and puff but Montpellier pull away at the end 18:36
Hockey: Ireland strike late on to claim bronze 17:55
Champions Cup: Leinster meet Saracens and Ulster face Toulouse in quarter-finals 17:13
Here is your handy guide to sport on television this week 17:01