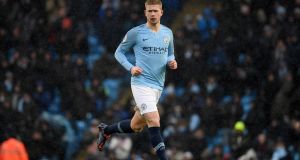 Kevin De Bruyne has denied that he felt tired at the end of last season, but admits that a summer break of three weeks was not long enough after almost a full year of exertion.

The Manchester City playmaker could start in Tuesday night’s Carabao Cup quarter-final at Leicester, having returned from a six-week absence to make a substitute appearance against Everton on Saturday. He has played only five times to date this season, three of them from the bench, after sustaining injuries to both knees and last week Pep Guardiola suggested the Belgian was so “exhausted” that the enforced rest may have the happy effect of freshening him up mentally for the next five months.

“Maybe, but I’m not sure I agree with that,” De Bruyne said. “I played the most of anyone last year – in the whole world. And I played the World Cup without a problem. I think the most important thing is having a summer break; if you have that you can feel okay, but there is always a time in someone’s career where you feel a bit less.

“I felt all right and it was just a shame that, when I came back, after one week I was out for 2½ months. I was happy to come back [from that] and worked really hard, but after three games it happened again.”

De Bruyne made 63 appearances for club and country during 2017-18, his World Cup ending on July 14th when Belgium defeated England in the third place play-off. He returned to pre-season training at City on August 6th and believes the period of downtime was too short.

“[A longer break] was not possible,” he said. “I wasn’t exhausted. I think in general people need a good summer break; sometimes we play for 11½ months at a time and there is not enough time to rest. I had a rest of about three weeks after 12 months of playing. Is that short? Probably, yes. But I felt okay to come back. I trained and was out after one week – it’s just the way it goes.”

Both injuries were “accidents” rather than the result of muscular issues, De Bruyne emphasised, and now he hopes to improve City’s chances of retaining the Carabao Cup. Sergio Agüero, left on the bench against Everton after missing four games with a groin injury, should also be involved at the King Power Stadium and he says the team’s depth has come to the fore in their absence.

“That’s why you invest in the team and put all that money in to have a full squad,” he said. “The investment is the beginning: they did really smartly by buying young players who can get better. We’ve a squad of 21 or 22 players and it doesn’t matter who plays – they have regular games in the team. We are fully there for the four trophies.” – Guardian