All the latest injury updates ahead of the weekend action 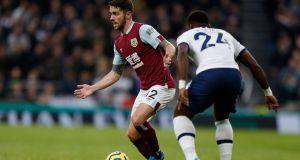 Robbie Brady is in contention for Burnley’s game against Sheffield United on Sunday. Photograph: Ian Kington/AFP via Getty Images

Norwich (20) v Brighton (15), 12.30pm – Live BT Sports 1
Norwich will welcome back defender Timm Klose from suspension but midfielder Moritz Leitner is out for the rest of the season as he requires hernia surgery, while defensive trio Grant Hanley, Christoph Zimmermann and Sam Byram (all hamstring) remain sidelined.

Brighton are hopeful Davy Propper and Adam Webster will be fit to feature. Midfielder Propper came off against Manchester United with a tight calf but is scheduled to train on Friday, while defender Webster missed the 3-0 defeat with a hamstring problem.

Leicester (3) v Crystal Palace (12), 3pm – Live Sky Sports Premier League, Main Event and Sky One (free to air)
James Maddison is a doubt for Leicester after the midfielder aggravated a hip problem on his return from injury at Everton. Brendan Rodgers admitted there could be changes to the side for a fifth match in 15 days. Wes Morgan, Hamza Choudhury, Ayoze Perez, Demarai Gray and Kelechi Iheanacho are among the options available.

Palace striker Christian Benteke is fit again having missed the last two matches – both defeats – with a thigh problem. Long-term absentee Martin Kelly (calf) has begun training with the squad having been sidelined since January. Jeffrey Schlupp remains absent after sustaining an injury when training resumed, as does fellow defender James Tomkins (thigh).

Manchester United (5) v Bournemouth (19), 3pm – Live BT Sports 1 & Premier Sports 1
Ole Gunnar Solskjær may make a few alterations as the Manchester United manager balances knocks and a hectic fixture schedule. The United boss said “if there are a couple of changes don’t be surprised” following Tuesday’s 3-0 win at Brighton but did not reveal names and admitted it would be nice to stick with the same line-up. Solskjær revealed Axel Tuanzebe is set to miss the rest of the season through injury, with fellow defender Phil Jones a few weeks away from resuming training with an issue of his own.

Bournemouth boss Eddie Howe will make late calls on the fitness of a couple of unnamed players. Top scorer Callum Wilson remains unavailable as he completes a two-match ban having collected his 10th booking of the season.

Wolves (6) v Arsenal (8), 5.30pm – Live Sky Sports Premier League & Main Event
Wolves have no new fitness worries, although Adama Traore may return to the starting line-up after coming off the bench in the 1-0 win at Aston Villa last week.

Chelsea (4) v Watford (17), 8pm – Live Sky Sports Premier League & Main Event
Mateo Kovacic will miss out for Chelsea after the Croatia midfielder picked up an Achilles problem. Defender Fikayo Tomori is still sidelined with a muscle problem but is edging closer towards a return to training.

Sheffield United will be without John Fleck, John Lundstram and Luke Freeman. Jack O’Connell is still battling a knee injury, but is back training on the grass.

Felipe Anderson has been added to West Ham’s injury list. The Brazilian midfielder suffered a hamstring tweak in the warm-up prior to Wednesday’s win over Chelsea. Sebastien Haller, Mark Noble and Arthur Masuaku, who all missed out in midweek, are all making progress and will be assessed.

Matt Targett is out for Aston Villa after picking up a hamstring injury in last week’s 1-0 home defeat to Wolves. Ezri Konsa is battling a foot injury after suffering a knock and has not trained this week, although boss Dean Smith is hopeful he will recover in time. Tom Heaton and Wesley (both knee) remain out and Borja Baston has left the club.

Southampton (14) v Man City (2), 7pm – Live on BBC One
Southampton manager Ralph Hasenhüttl is dealing with a number of injury concerns but Moussa Djenepo and Jack Stephens are available. The Saints boss said Pierre-Emile Hojbjerg and Sofiane Boufal are unlikely to feature after missing last weekend’s win at Watford, while Nathan Tella and Yan Valery are doubts. Jannik Vestergaard is struggling with a muscle problem but fellow centre back Stephens is back from a one-game ban, while winger Djenepo can play for the first time since play resumed having served a three-match suspension.

City manager Pep Guardiola will have Fernandinho available again after suspension. With winger Leroy Sane having now left for Bayern Munich, top scorer Sergio Agüero is the only major absentee with a knee injury.