Italia 90 Revisited: Women could be the secret of Ireland’s success

After a dramatic transformation against Holland, Peter Byrne ponders why it occured 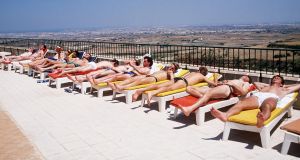 The Irish players, without their wives and girlfriends in tow, catch some sun during the pre-World Cup training camp in Malta. Photograph. Billy Stickland/Inpho

June 23rd, 1990: After Ireland advance to the last 16, Peter Byrne teases out the argument for sex before sport

The transformation was dramatic. From the crew who had toiled to convert possession into the hard currency of goals against Egypt, Ireland suddenly looked a team of verve and some vision. And Holland, not unqualified to make such judgments, labelled them as one of the more dangerous of the 16 countries still surviving in the World Cup championships here.

Was the difference down to man management by Jack Charlton, the wounded tiger syndrome or, perhaps, more pertinently, women.

Last Monday, Charlton, sensing a growing mood of discontent among the squad, opened the doors of their hotel in Palermo to the wives and girlfriends of the players.

It hadn’t always been thus, for hours after the game against England ended in Cagliari, a major crisis developed when three wives presented themselves, unannounced, at the hotel. Charlton was manifestly unimpressed, not so much by the presence of the women as by the fact that players had broken the squad rules and invited spouses without first seeking his permission.

It was only through some straight talking that disciplinary action was deferred, but in spite of that, or perhaps because of it, the rule was relaxed last Monday and wives, decamped in various parts of Sicily, were invited to stay in the hotel.

In doing so, Charlton may have been influenced by the decision of his old adversary, Franz Beckenbauer, in bending the rules for the members of his West German squad last week. Beckenbauer had once found himself on the opposite side of the bedroom door after Helmut Schoen, the then German manager, banned players from seeing their wives during the 1974 championship.

More controversially, the women were not admitted to the victory celebrations and Gerd Muller, the celebrated West German forward, was so upset by this decision that he vowed never to play international football again.

The arguments on sex before sport, its merits and demerits, are neither new nor conclusive. The adage that you pay your money and you take your choice may not be entirely appropriate, but it makes the point.

The question at issue in an event such as the World Cup concerns not so much sex as the capacity of wives and girlfriends to act as amateur psychologists for their loved ones.

People not familiar with the problems of living out of a suitcase for five or six weeks can experience a wide range of problems from boredom to old-fashioned homesickness. In that situation, there is an increasing belief that the presence of women in the camp makes for a happier, and, by extension, more successful squad.

The counter argument is that wives with no interest in sport can become involved in personality clashes while sitting around hotel foyers and that this in turn will involve the husbands.

Perhaps the answer lies in discretion and after a lifetime spent on the roads in the pursuit of footballing matters, Jack Charlton may be in a better position than most to make that judgment.

Encouraging footnote. Wives and girlfriends were again admitted to the Irish team’s hotel on Thursday night when the singing ended early and the peace was disturbed only by wandering, unaccompanied journalists.

1 Exiled Seán O’Brien not ruling out a third Lions tour
2 PSG break quarter-final curse with stunning injury-time victory
3 Seán Moran: It won’t take much before cancelling All-Ireland looks like a solution
4 ‘Embarrassment, anger, sadness’: the decline of the great Stephen Hendry
5 Heroic insanity: When Michael Dunlop raced home in memory of his father
Real news has value SUBSCRIBE
Crossword Get access to over 6,000 interactive crosswords