Tottenham manager defends midfielder, insisting he will return to form 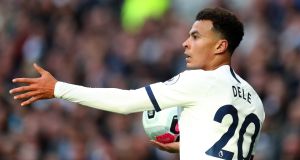 Mauricio Pochettino has backed Dele Alli to come good and looks forward to the England international being “a bit naughty” on the pitch.

Alli is one of many Tottenham players who have underperformed this season but the 23-year-old was singled out by Sky pundits for criticism after last weekend’s defeat at Liverpool. Spurs sit 11th in the Premier League and Pochettino has backed the player brought in from Milton Keynes four years ago to help the club climb the table.

“We know very well that Dele is going to be back,” he said. “His mentality is good. Always you need time to recover the feelings and performance after a tough period. The most difficult thing is to know how long it will take to be again at your best. As long as you are consistent and working hard, you are going to arrive again though, because the quality is there. The only thing is, the competition do not wait.”

Pochettino drew comparison to an earlier period in Alli’s career where the player came under criticism for, among other things, giving the bird to his England team-mate Kyle Walker.

Talking about the “devil” in his player, the manager said: “It’s still there inside of him. If you go back, we all criticised him. But I said I liked this Dele Alli, because sometimes players being a bit naughty makes that difference. The devil is going to appear again. I don’t know when. But for sure it will.”

Pochettino brushed off criticism of Alli from pundits and said he would never become one. “Sometimes you get upset when you read or you listen but when you are mature you understand that that is the business: if you go to the TV you need to say something,” he said.