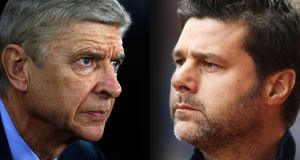 Arsenal manager Arsène Wenger and Mauricio Pochettino, manager of Spurs. Saturday sees their seventh head-to-head meeting since Pochettino took over at Tottenham in May 2014

Mauricio Pochettino heads into Saturday’s north London derby insisting he is not jealous of Arsenal’s success in claiming two FA Cups during the 3½ years he has been Tottenham Hotspur manager, a period in which the Argentinian has significantly enhanced the club but failed to secure any silverware.

Pochettino was full of praise for Arsène Wenger before his seventh head-to-head meeting with the Frenchman since taking over at Tottenham in May 2014, describing him as a “special manager” and an “innovator”. However, he was somewhat dismissive of his counterpart’s achievement of beating Aston Villa and Chelsea at Wembley in 2015 and 2017 respectively to secure the sixth and seventh FA Cups of Wenger’s Arsenal reign. Arsenal also secured their fifth FA Cup under Wenger, with a 3-2 victory over Hull City, 11 days before Pochettino moved from Southampton to White Hart Lane.

“Tottenham is Tottenham, and Arsenal are in another stage of their project. I don’t care where they are, after 3½ years we achieve a lot,” said Pochettino. “I would like to achieve more; to be first and not second, and win cups, but we are in a different stage of our project.”

Under Pochettino, Tottenham have secured third- and second-place finishes in the Premier League, and this season secured progression to the knockout stage of the Champions League with two group games to spare and having beaten European champions Real Madrid 3-1.

They are also viewed by many to be one of the most attractive, progressive teams in the country, yet tangible success remains elusive, with Spurs’ hopes of winning a first trophy since the League Cup in 2008 already dented by last month’s 3-2 defeat to West Ham United in the fourth round of the same competition.

Prior to that game Pochettino had dismissed the importance of domestic trophies, and he reasserted that view as he insisted Tottenham have no reason to look enviously upon their local rivals before their first meeting of the campaign.

“It is important to keeping doing well in a long process, important to improve every game and every season, and say we can win not only cups but the Premier League and Champions League, that is the pressure we are building.

“The pressure to win only cups is not useful for us. If we can win the Carabao Cup and the FA Cup – that is fantastic, but our principal option is to win the Premier League and put Tottenham in a position to win the Champions League.”

Pochettino hopes to have a number of players back from injury for Saturday’s encounter at the Emirates Stadium, including Harry Kane, Harry Winks and Dele Alli.

Along with Kieran Trippier, Danny Rose, and Eric Dier they provide Tottenham with a strong English core, something the manager believes can be the foundations upon which the club’s long-term success is built.

1 Rory McIlroy puts integrity ahead of glory in US PGA second round
2 Buttler and Woakes drag England from the brink to set up thrilling Pakistan win
3 Frustration for Lowry and McIlroy as Li leads at US PGA
4 From Maestro to Mister: Andrea Pirlo named new Juventus boss
5 Michael Walker: Pressure mounts on Barcelona to stop slide
Real news has value SUBSCRIBE