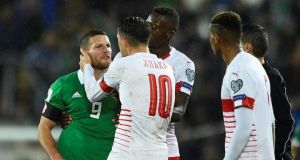 Granit Xhaka has told Northern Ireland to move on from the penalty call that has left Switzerland in charge of their World Cup play-off.

The Northern Irish are still reeling from referee Ovidiu Hategan’s decision to point to the spot at Windsor Park on Thursday for a dubious handball against midfielder Corry Evans, with Ricardo Rodriguez converting from 12 yards to give them a 1-0 advantage ahead of Sunday’s return leg in Basel.

Replays showed Michael O’Neill’s men had every right to feel aggrieved as Evans’ arm was tucked into his side and Xherdan Shaqiri’s shot may have struck his back anyway.

Switzerland were the better side in Belfast but the fact they claimed the upper hand in such contentious circumstances has left a bitter taste for the Northern Irish, who have been told by Xhaka to get over it.

“I don’t know why it is such a big topic or why there is such a big discussion around it; we should leave it,” the Arsenal midfielder said.

“We were the better team and we want to show it again on Sunday and qualify for Russia. We are a good team.

“We are maybe the better team compared to Northern Ireland and on Sunday, with all the support that we will have behind us, we want to make them proud and qualify for the World Cup.

“To discuss the penalty, and whether it was a penalty or not, it is the decision of the referee and not of interest to us.

“It is difficult to play Northern Ireland — defensively they are very strong — but I thought we played a good match from the beginning in Belfast and created a couple of good chances.

“Sunday is a totally different game. Both teams will act differently but I think our victory in Belfast was deserved.”

O’Neill was also incensed that referee Hategan only gave a yellow card to defender Fabian Schar for a wild fifth-minute hack at Stuart Dallas that injured the Leeds winger and looks to have ruled him out of Sunday’s game.

Yet Swiss boss Vladimir Petkovic argued the Romanian official was “good in general”. He instead focused on Hategan missing what he thought was a shirt-pull on Stephan Lichtsteiner in the box when he gave Northern Ireland a free-kick instead.

Asked whether he would be so accepting of the penalty decision were the boot on the other foot, Petkovic replied: “I would accept it, of course — as a professional sportsperson I would accept every decision made by the referee.

“Of course it has been talked about a lot but there were other decisions, in the 85th minute for example, and these decisions went against us. It is always difficult but I would always accept the decisions of the referee.

“I’ve analysed the match again and there were decisions that went against us, especially in the 85th minute. I thought the referee was good in general and I thought we won deservedly.”

1 Stirling and Balbirnie tee off to tee up another famous Ireland win over England
2 Restrictions threaten 147 unbroken years of Irish athletics history
3 RG Snyman primed for hectic run with Munster and South Africa
4 Seán Moran: Boylan documentary offers a compelling insight into former Meath boss
5 ‘A win like that is special and one we’ll remember forever’ - Ireland skipper Balbirnie
Real news has value SUBSCRIBE
Crossword Get access to over 6,000 interactive crosswords