Daniele De Rossi, who was filmed reacting angrily when asked to warm, up joins him 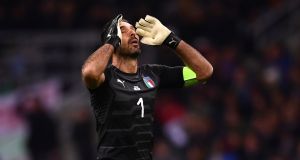 Italy’s goalkeeper Gianluigi Buffon during the 0-0 draw with Sweden at the San Siro. Photograph: Getty Images

Gianluigi Buffon called time on his 175-cap international career following the confirmation of Italy’s failure to qualify for the World Cup — but head coach Giampiero Ventura stopped short of resigning.

The 39-year-old Juventus goalkeeper kept a clean sheet against Sweden at San Siro but his outfield team-mates failed to score the goals that could have overturned the Scandinavians’ 1-0 advantage in the two-legged European play-off.

Buffon had already decided to hang up his national-team gloves after Russia 2018 and, with that opportunity stripped from him seven months before the tournament, he is taking his leave early.

In tweets from the Vivo Azzurro account, he said: “We are proud, we are strong, we are stubborn. We will pick ourselves up as we have always done.

“I am leaving a squad that will know how to pick itself up again.

“Best wishes to everybody, and especially to those with whom I have shared this beautiful journey.”

Buffon, who won the World Cup with Italy in 2006, continued: “The blame is divided equally among all of us. There must be no scapegoats.

Buffon: "Not sorry for myself but for Italian football"

De Rossi: "Why the hell should I go on? We don't need to draw here, we need to win!"

#DeRossi arguing insigne's case with one of Ventura's assistants

“We win together and we lose together. I’m not feeling sorry for myself but I’m sorry about the whole affair. We blew something that could have meant so much. The main regret is that it ended like this.”

Ventura, whose contract with Italy runs until 2020, has faced widespread criticism, with the Azzurri limping towards second place in their qualifying group before meekly bowing out against Sweden.

His failure to appear on time for a post-match press conference hinted he too had chosen to bow out, but instead the 69-year-old insists he needs more time to think.

He said: “I will discuss my future with the Federation. I feel I must apologise to all Italians for this result. It is a terrible result from a sporting perspective.

“I am really sorry but I am grateful to those at San Siro who helped us and supported us to the end.”

Opting, like Buffon, to draw a line under his experience with the national side on a bitter night in Milan was Daniele De Rossi.

The Roma midfielder, 34, was filmed reacting angrily when he was asked to warm up ahead of a mooted substitute appearance, with La Gazzetta dello Sport claiming he wanted Napoli forward Lorenzo Insigne to go on in his place and pursue the goal that would force extra-time.

Later he spoke directly to the sports daily, saying: “It’s a dark moment for our football. It’s very bad that we’ve all been part of this and now we’re all going to have time to think.

“The Federation will have to reflect on how we can put things right. Beyond everything that was wrong tactically, technically and physically, we just did not deserve to qualify.

“There are now 16 and 17-year-olds at Coverciano (Italy’s training base) and so I think this is the last time I’ll be wearing this shirt.

“After the match there has been a funereal atmosphere around the place.”

On the argument with coaching staff that was broadcast on Italian television, he added: “It was a fraught moment and I wanted them to bring on the attacking players.

“I thought maybe Insigne or (Stephan) El Shaarawy would be more effective than me.”

1 The game they loved so well: How cricket united Hume, McGuinness and McCann
2 Brain as well as brawn on Sexton’s lockdown menu
3 Brooks Koepka out to win Majors, not make friends
4 Andy Farrell admits Ireland net may need to be spread wide in the autumn
5 Nicola Sturgeon ‘furious’ as players’ pub trip sees Aberdeen game postponed
Real news has value SUBSCRIBE
Crossword Get access to over 6,000 interactive crosswords