‘Best fans in the world’ left when they were needed most 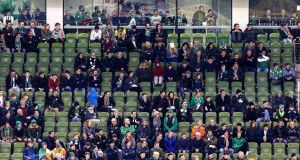 Those in the smaller crowd on Tuesday night, the one that stayed to see the wrecked Irish players leave the field, can at least say: I was there, all the way. Photograph: Gary Carr/Inpho

Many thousands of Republic of Ireland fans felt that they couldn’t bear to stay until the bitter end of the Tuesday night’s reality check by the ice-cold Danes. The sight of those thousands of empty seats and the corresponding heavy silence creeping into the evening offered a suitably haunting backdrop to the terrible experience that the players were suffering on the pitch.

Two years ago, Liverpool manager Jürgen Klopp found himself shocked by the sight of many, many hundreds of supporters filing out of Anfield with a good 10 minutes left in a grim arm-wrestle of a game in which the ‘Pool trailed 2-1. Anything, in other words, was still possible but the supporters left anyway. This mass abandonment disturbed Klopp to the degree that he admitted afterwards: “I felt pretty alone at this moment.”

And Klopp is just a manager. So imagine how alone the 11 Ireland players must have felt on Tuesday night: their early-evening ambitions and dreams torn asunder, their minds shot by what was happening on the field and their bodies wrecked from chasing shadows in the second half and with every break in play inescapably aware that the crowd was vanishing around them. The message was clear: they had been abandoned to their fate.

Someone blackly remarked that you could probably accommodate the remaining fans in an average Victoria’s Secret department store. Of course, the chances are that the people who stayed until the final whistle were not among the Irish fans who gathered last Saturday afternoon in their hundreds (think about that) outside the lingerie store on Strøget, the Copenhagen shopping boulevard, to cheer unwitting customers as they entered and left the place.

It was difficult to see at the time because there were, as said, hundreds of young Irish men in their replica shirts and scarves semi-circled around the shop but it’s probable that many of the customers leaving and entering the shop were women. You’d have to wonder how many of them enjoyed the experience – and if they went along with the bantz, the harmless fun, what choice did they really have? Strøget marked the low point of the ongoing self-congratulatory phenomenon that is the Best Fans In The World touring carnival.

It was orchestrated, cringingly self-aware, arguably an act of harassment and also dull and tired. You could see it in the polite, fleeting smiles of the locals as they walked past. Smiles that said: ah, the Irish. No wonder it was a cinch to invade the place all those centuries ago. But if Saturday afternoon was one of those scenes that made you wish that the Irish would get over the being-Irish thing, then Tuesday night marked Last Orders for the delusion that Irish fans are any better, any different.

For it was in the last 20 minutes of the match that the players needed the crowd most. The notion of a contest and the glory of making it to Russia had long disappeared. The managerial half-time personnel gamble had failed and all of a sudden, journeymen Danish footballers were attempting a passable impression of Brazil circa ‘70. Fans leave games early for all kinds of reasons. For some, its sheer pragmatism: beat the others, beat the rush and get home at a reasonable hour for another working day.

Others walk out in the belief that their departure is a kind of protest-vote or registration of disgust at the ineptitude of what they have seen. It’s a symbolic message to the manager.

Others convince themselves that they can’t simply bear to watch anymore: that it is too painful. As ex-Westlife crooner Brian McFadden said, in explaining his need to hit the bricks when the game was still a relative cliff-hanger at 1-3: “My heart was just ripped out of my chest.” That sounds absolutely appalling and clearly required immediate medical intervention. But not everyone has that excuse.

Sport is littered with stories of people leaving games early and then living to regret the moment. Among the Manchester United fans who decided to cut their losses early at the Champions League final in 1999 when Alex Ferguson’s team trailed Bayern Munich 1-0 in the 89th minute was the club’s eternal poster boy for on and off-field glamour and beauty, Mr George Best. The Belfast boy was in a taxi when Teddy Sheringham and Ole Gunnar Solskjær hit those screamers and never saw his club’s most famous hour.

In 2013, hundreds of Miami Heat fans filed out of the American Airlines arena in the NBA finals when their team trailed by four with 28 seconds left. Many US arenas have escalators: leaving with the mob can be a slow process. Cue a mental 30 seconds in which the Heats’ LeBron James and Ray Allen hit three-pointers to bring the game to overtime. By then, a few thousand fans had left the arena and after realising their mistake, they began furiously pounding the glass-doors for re-admittance, to no avail. They missed one of the great moments in the history of their team. And it served them right.

Clearly, there was never going to be a miraculous revival once Ireland fell 3-1 behind on Tuesday night. Beating Denmark 4-3 just wasn’t going to happen. The team was falling apart, as sometimes happens in sport. People knew they weren’t going to miss anything except more Danish goals when they decided to leave.

But that is why it was vital that they remained part of the crowd, part of what had been something special at the start of the night, when 50,000 individuals got together to create a really spine-tingling atmosphere around Lansdowne. Half a century ago, baseball fan John Updike showed up for a low-key autumn daytime baseball game in Fenway Park because it was Ted Williams’s last day with the Boston Red Sox. He wrote about what was a maudlin midweek afternoon that had nothing much riding on it and the essay, Hub Fans Bid Kid Adieu, was and is a perfect depiction of what it is like to be in the crowd – the frustrations, the annoyances and, of course, the pure privilege.

The rows and debates over Irish football – whether Martin O’Neill should stay or go, how the team should play, whether the FAI is doing enough to bring young talent through – will rage on. All that the supporters can do, when they turn up on international nights, is become part of the crowd.

Irish international football has a peculiar and slightly exotic history: it is mostly a series of stubbornly prosaic 1-1 draws broken by era-defining occasions lit by fireworks of deed and emotion and offering those lucky enough to be in the crowd to say: I was there. Part of the fun of following Ireland is that it’s kind of a treasure hunt: you never know when you are going to stumble on the next improbable moment of glory.

Stuttgart, Genoa, Rome, New York, Lansdowne, Gelsenkirchen, Lille, Cardiff: the roll call of big Irish football moments have come to serve as very specific and emotive markers of time and place. For a small while on Tuesday night, Ireland versus Denmark felt like it was going to be one of those nights until, quite quickly, it turned into something you wanted to forget. Thousands made the decision to start forgetting before it was even over.

Those in the smaller crowd on Tuesday night, the one that stayed to see the wrecked Irish players leave the field, can at least say: I was there, all the way.