Arsenal reek of broken dreams as Spurs continue to advance 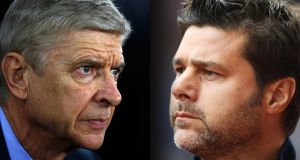 A gleaming new stadium looming over north London. A distinct style based around homegrown players paid a fraction of what other comparable clubs are paying.

A foreign manager who arrived in England to widespread scepticism before being revered as a magus-like figure who has led a revolution in physical preparation. Tottenham are becoming the club that Arsenal should have been.

They’ve even sold one of their better players to Manchester City – albeit, and this perhaps shows how they’ve improved upon the Arsenal model – with a replacement already in place.

The difference – and Arsenal fans will rightly rush to point this out – is that Wenger actually won things, not just in his early days when he introduced sophisticated new ideas such as basing nutrition around broccoli and pasta rather beer and more beer, or buying players from France, but also more recently. Even in the three years since Mauricio Pochettino took over at Tottenham, Arsène Wenger leads the trophy count 2-0.

Yet finishing above Arsenal last season was a hugely significant moment for Spurs. For the first time since 1995, there was solid statistical evidence that they were the best team in north London.

This season the gap between the sides is already four points. It’s three years and six games since Arsenal last beat Tottenham in the league. As Spurs are beating Real Madrid and Borussia Dortmund in the Champions League, Arsenal are snoozing through deathly 0-0 draws against Red Star Belgrade in the Europa League.

The FA Cups, the myth of St Totteringham’s Day, created a mirage: the gulf between Tottenham and Arsenal was significant even before last season, and it is getting bigger.

And what perhaps makes the inversion of roles most galling for Arsenal is that Tottenham have not accelerated past them with the sort of injection of cash that has elevated Chelsea and Manchester City. This is not financial doping (or at least not as Wenger used the term; others further down the pyramid, of course, may argue that every Premier League club is up to the eyeballs with television revenue). Tottenham are an example of what can be achieved through careful husbandry, a faith in youth and the establishment of a collective that works both tactically and psychologically.

That in turn casts Arsenal’s failings in a worse light. Wenger was unfortunate that the economic future for the club he had mapped out, the new stadium closing the gap to the continent’s elite, was undermined by the unexpected interest in football from oil tycoons but what Tottenham have shown is that subservience to oligarchs is not inevitable.

They benefit, of course, from the fact that they have their own billionaire in the background in the form of Joe Lewis, but their net transfer spend since Pochettino arrived at the club is £12 million. Arsenal in the same period have a net spend of £199 million. Net spend is not everything, but it is a handy quick reference and for Arsenal that is a hugely troubling statistic.

But it’s perhaps not even the worst aspect in any comparison: that’s youth development.

There could be six Tottenham players (plus Kyle Walker) in the England squad for next summer’s World Cup all of whom, bar Kieran Trippier, joined Tottenham before they were 20.

Arsenal’s recent history, meanwhile, is strewn with abandoned promise. Gareth Southgate’s most recent squad featured not a single Arsenal player. At 28, Theo Walcott is the oldest promising teenager in the world. At 25, Jack Wilshere is a riddle wrapped in a mystery shrouded by the smoke of a cheeky cigarette. At 28, Kieran Gibbs is at West Brom. At 24, Alex Oxlade-Chamberlain may just have got out in time.

The Emirates reeks of broken dreams, not just of individuals but of the club as a whole. Stagnation has become a way of life. That the futures of Alexis Sánchez and Mesut Özil linger undecided is extraordinary. What if they go in January? What if they don’t? What is the long-term plan? Is there a long-term plan?

Again, for Arsenal, Tottenham offer an unwelcome contrast: Pochettino has been ruthless in his handling of Walker and, before him, Andros Townsend and Nabil Bentaleb, an attitude that presumably helped persuade Danny Rose to fall – at least partially – back into line after his act of minor rebellion in the summer.

Problems will come for Tottenham, new stadium or not. They cannot keep paying players so much less than their rivals. Walker will not be the only key player to see opportunities elsewhere. Pochettino may also be lured away.

It’s still not entirely clear how much the move to a new stadium will restrict finances. It’s entirely possible than in a decade football will be wondering how Tottenham spurned this immense opportunity. Existence on the mezzanine just below the elite is never easy, the transition to becoming part of the true elite all but impossible.