Jorge Delhon worked for Argentina’s Football for All and was accused of taking $500,000 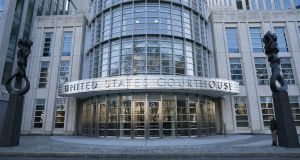 The Federal Courthouse in Brooklyn where Juan Ángel Napout of Paraguay, José Maria Marin of Brazil, and Manuel Burga of Peru are on trial in the Fifa corruption scandal. A former Argentine football official has reportedly committed suicide after he was accused of bribe-taking in testimony to a trial of top former Fifa figures in New York. Photo: Don Emmert/Getty Images

A former Argentinian football official killed himself just hours after he was accused of taking bribes by a witness in the New York corruption trial examining endemic misconduct at world football’s governing body, Fifa.

Jorge Delhon, 52, a lawyer who worked for Argentina’s Football for All, a government programme that holds the broadcast rights to domestic football in the country, was accused of accepting annual $500,000 (£380,000) bribes from 2011 to 2014.

The sworn allegations were made by Alejandro Burzaco, an influential former sports marketing executive, who has already pleaded guilty to corruption charges and has been assisting US authorities in the sprawling investigation into Fifa.

Burzaco claimed to have agreed the bribes with Delhon and another Argentinian official to receive broadcast rights to domestic club competitions. Shortly after he made the allegations in court on Tuesday, police in Buenos Aires announced that Delhon had killed himself.

The trial of three former South American football executives continued on Wednesday. As Burzaco prepared to give a second day of testimony, he broke down in tears on the witness stand and was escorted from the courtroom.

Lawyers for Juan Ángel Napout, the Paraguayan former president of South American football’s governing body Conmebol, accused someone in the courtroom of “staring down” the former executive.

As Wednesday’s proceedings commenced, Burzaco continued to give details of how he orchestrated multi-million dollar bribe payments to obtain the exclusive marketing rights to the Copa America tournament for a company, Datisa, created to house a group of rival sports marketing corporations, including Burzaco’s own Torneos y Competencias.

Burzaco said he had agreed to pay $16.5m to a group of senior Conmebol officials to secure the rights. The deal allowed Datisa the rights to the 2015 tournament and the next two editions of the event. The $16.5m bribe payment would be repeated for the next two Copa Americas, and the contract would allow Datisa first refusal for rights in the future.

The Argentinian national, who turned himself in to authorities weeks after a May 2015 morning raid on a hotel in Zurich unveiled the federal investigation into Fifa, said the Copa America contract was finalised during a trip to London in May 2013.

Burzaco said he had travelled to the UK for the Champions League final, which was held at Wembley Stadium, and met with a number of Conmebol officials at venues including the Waldorf Hilton hotel and a restaurant in Mayfair, in an attempt to get their signatures for the new contract.

Burzaco recalled the details of one meeting at the Waldorf with Marin and Marco Polo Del Nero, a Fifa executive and now the current president of the Brazilian football confederation. The pair, who were due to receive $3m in bribes for the first Copa America, were angry they had not yet been paid a separate $2m annual bribe for the rights to another South American club tournament, the Copa Libertadores. The bribes, Burzaco said were “normally paid in the first six months of the year” but had not yet reached the two officials.

The Copa Libertadores annual bribe was later paid to the two, Burzaco said.

On Tuesday Burzaco, alleged that Julio Grondona, a former head of the Argentinian FA and a senior vice-president at Fifa, had taken at least $1m in bribes to vote for Qatar to host the 2022 World Cup.

The trial is expected to last up to six weeks. – Guardian service