TV View: Will O’Neill and O’Donoghue ever see eye to eye? 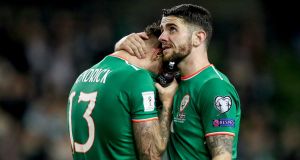 It’s the old John Cleese line. You know the one. “It’s not the despair, I can take the despair . . . it’s the hope I can’t stand.” And until the 29th minute we were giddy with hope, until the whole evening transmuted in to the shape of a pear.

Which was much the shape of Martin O’Neill’s relationship with Tony O’Donoghue come the end of the evening. It had been banana-shaped until then, but Tony’s chucking of some uncomfortable campaign stats at the manager left it in, you sensed, an irreparable state. O’Neill walked out on the chat and, ridiculously spikey as he has been at times with the RTE man, it was hard enough to blame him on this occasion.

Even Eamon Dunphy conceded “this is not the time”, which it wasn’t. For all his faults – and it might not be unreasonable to suggest he made a hatful of them for the second leg – he would have felt the pain of the humiliation more than most. Give him a day, or two, for some numbness to set it, then chuck away.

And a humiliation it was. Denmark’s Thomas Delaney had said after the first leg that playing Ireland was “a bit like opening a can of baked beans with your bare hands – it takes time”. They located their tin-opener in Dublin and there were times in that closing half hour you feared they’d score 57 varieties of goals. In the end they settled for just the five.

Inevitably, the blame game started soon enough, but the only ones who should have the finger pointed at them are those who suggested Christian Eriksen was overrated and we shouldn’t fret about him too much.

And the evening had started on a heavenly hopeful high when Brendan Gleeson urged the lads to rage against the dying of the light of our qualification hopes after failing to get the away goal in Copenhagen.

Brendan Gleeson reading Goosey Goosey Gander would inspire you, never mind Do Not Go Gentle Into That Good Night.

"We can come back again" - A defiant Martin O'Neill speaks to @corktod after a "really tough" night for his Irish team #irlden #rtesoccer pic.twitter.com/0OaGVwle6t

Hats off to the RTÉ montage maker because 40 seconds of highlights from Friday’s game had to be found for the opening bit of Gleeson’s piece – the mother, father, Granny and Grandad of all tasks. But then it switched to Houghton, O’Leary, Houghton again, Robbie Keane and Robbie Brady scoring goals that would still leave you all a-tingle, before showing us James McClean hoofing an opponent in to Row Z as Gleeson roared “do not go gentle into that good night”. And then there was James scoring against Wales. At that point you’d have donated blood for Ireland. Only at your local clinic, mind, we’ve moved on from all that.

Team news. Eamon was doing a bit of quiet raging himself. If he’d ever been given the Freedom of the Aviva, he’d have handed it right back. No Wes. No Longie.

Liam was no less displeased, but Didi Hamann tried to buck them up, insisting that the selection and formation had worked before, so there was no reason why it couldn’t again. “It gives me great confidence that the boys can do it tonight,” he said.

Eamon reminded us of how rubbish we are at home and that “when Wes Hoolahan is on the pitch we score every 46 minutes, when he’s not on the pitch we score every 133 minutes”. That wasn’t encouraging, but he did at least persuade us that all the cheeky talk from the Danish gaffer Age Hareide probably meant that he was shaking in his boots. “He’s done a lot of spoofing, but sometimes that bounces back and hits you in the gob,” said Eamon, the less kind among you suggesting he was speaking from experience.

Off we went. And five minutes, 12 seconds later we found ourselves genuflecting in the direction of Shane Duffy after (a) he scored and (b) ruled out the possibility of our worst-est of nightmares, penalties.

Just the 85 minutes to hold on.

And then a three minute spell that will deprive the nation of a good night’s sleep for quite a considerable time. “This night of nights turning in to a nightmare,” said George. “It’s too early for desperation,” Ronnie advised, but he said it in a highly desperate kind of way, so it sounded like he wasn’t even convincing himself.

Half-time and the mood in the studio bordered on the funereal. News of Wes coming on lifted it a touch, Aiden McGeady not so much. “He might be a match winner, he might be anonymous,” Liam shrugged.

Second half. As the great Bill would have put it, ‘we’ll leave it there so’.

The Bendtner penalty? “The ignominy is complete,” said George.

So, for all the raging, the light died. La Gazzetta dello Sport calmly described Italy’s non-qualification for the World Cup as akin to the arrival of “the apocalypse”, but tried to cheer its readers up by saying they could at least now spend their summer by going to “concerts, the cinema and village festivals”. So, there’s always that.