Pochettino in no rush to sign new players in January 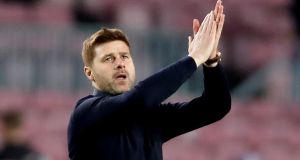 Tottenham manager Mauricio Pochettino suggested he was as concerned to move on players who are on the fringes of the squad. Photograph: Reuters

Mauricio Pochettino has said he would not be disappointed if Tottenham failed to strengthen their squad in January because he is mindful of the integration difficulties that mid-season signings face.

The manager took Lucas Moura from Paris Saint-Germain last January in a £25 million deal and the winger needed time to come to terms with what was demanded of him. Pochettino started Lucas in only five matches in all competitions over the second half of last season but this time out he has been a regular who has contributed significantly.

It was Lucas – on as a second-half substitute – who scored the goal at Barcelona on Tuesday night that carried Spurs into the knockout phase of the Champions League.

Pochettino will be alive to possibilities in the January window, having signed nobody last summer, but he suggested he was as concerned to move on players who are on the fringes of the squad. Fernando Llorente, who has barely featured, is a target for his former club Athletic Bilbao.

Pochettino’s hands are tied, to an extent, by the club having more than the maximum number of foreign players permitted by Uefa in Champions League squads. He was unable to name Juan Foyth, Georges-Kévin Nkoudou and Vincent Janssen for the group stage and he is on record as saying it would be preferable for any new recruits to be English. The problem is that they tend to be expensive.

“I would not be disappointed if we didn’t sign anyone,” Pochettino said. “I know very well that January is difficult and look what happened to different players that arrived last January. It takes time to understand and perform, to fit with the team.

“Sometimes it’s better not to sign if you don’t find the right player. And players who maybe don’t play too much need to go and play in another club. Maybe the best decision is to send them on loan or sell them.”

Pochettino’s team entertain Burnley at Wembley this afternoon, sitting third in the Premier League, six points behind the leaders, Liverpool.